We have been in Lisboa 5 days now. It is a beautiful city and people have been very friendly – great food, wine and art too. As to part of my purpose and research here –  we met Isabel Carlos at the Centro de Arte Moderna at the Gulbenkian Friday afternoon and saw this early work of Helena Almeida’s above among many others. It was wonderful to meet Isabel Carlos. She is the Director at the CAM at the Gulbenkian and has curated Helena Almeida in many exhibits, including the 2005 Venice Biennale and the exhibit at the Drawing Center in New York. It was just lovely to talk with her and also great to have Cydney there. There are some similarities in their paths – as they have both worked directing art institutions as well as worked independently as curators and writers/thinkers.

The first thing Isabel said to me with a grin was “So you are copying Helena.” She basically warned me away from this – saying it had been done before. She then spoke about the fabric in the images on my blog post of September 14th (I am calling these my “test” constructions) and said she thought the fabric was interesting and perhaps more personal and related to my own work. She was saying that maybe I should avoid the inhabitations with my body. Cydney kind of agreed with her on this and I wish I had been recording the exact conversation but I will ask Cydney to articulate this again.

She generously took us down into the bowels of the collection at the CAM to see several of the works of Almeida’s that were not packed up in boxes. Almeida’s work does translate well in catalogues and books but seeing the work in “real life” and at the proper scale was wonderful.

I loved these square ones with the horsehair and paper and the hands. I don’t know their titles. The hands are bigger than life size.

These two from the series called “Seduction” or “Seduzir” in 2002 were there on the wall in storage. Apparently she did this series after her sister died and there is an element of her sister who was very feminine and I believe Isabel used the word coquettish. These are large – 77” x 50” or 195cm x 126.

This early work from 1976. I believe it is called “Hearing,” was particularly thrilling for me to see in real life. Her piercing of the canvas is so delicate and ephemeral. 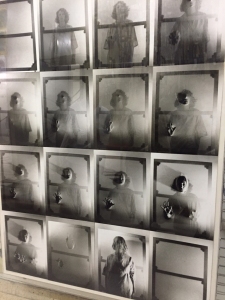 Yesterday, among other more touristy activities, we went to Helena Almeida’s gallery – the Filomena Soares Gallery. They were very kind as well and gave us several catalogues of Almeida’s work. They let us look at several of the pieces in storage. These two with Helena in the chair were particularly mesmerizing to me and I think very recent. I am not sure of the title of these but they are large at least 5 ft. tall and they are “unique” pieces. She does not print more than one of them. 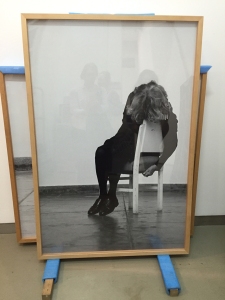 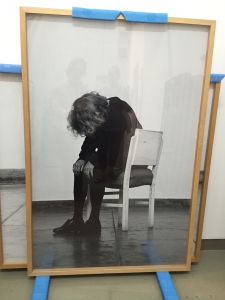 One more day in Lisboa, we leave for Obras tomorrow. Cydney and I are both ready to settle in and get to work.