“Landscape is a revelation of space and time, or, more precisely, the arrangement of elements, such as trees, rocks, hills, etc. are that. Arrangements of the body’s elements are postures, revelations, or expressions of inner states.” – Valie Export

The feminine body/subject, color, contemplative body/mind, energies, gesture, the landscape, the elements, fabric these are all aspects of the work I have been producing and exhibiting in Portugal and in the U.S. in collaboration with Portuguese photographer Luis Branco over the last two years.

I am now back in Portugal at the Obras Artist Residency for several weeks to continue to explore the interconnections between the “landscape” as a physical space that we touch and inhabit and also as a metaphorical space and metaphysical space that relates to both the exterior space of the body and the more interior spaces of the mind. The working title for this continuing project is Elemental Body / Elemental Landscape or Corpo Elementar / Paisagem Elementar.

Out of the many works we have produced, there are three specific images that we made in 2015 and 2016 that express this psycho/physical/mystical connection to the landscape that I am searching for. The first is an image taken by Luis Branco of me on the top of the mountain of Evoramonte in October of 2015 – Woman on Evoramonte / Mulher em Evoramonte. You can see that she is an older woman – her hands, her arms, the silver in her hair. She stands firmly with her bare feet on the earth – the skies and heavens surrounding her. 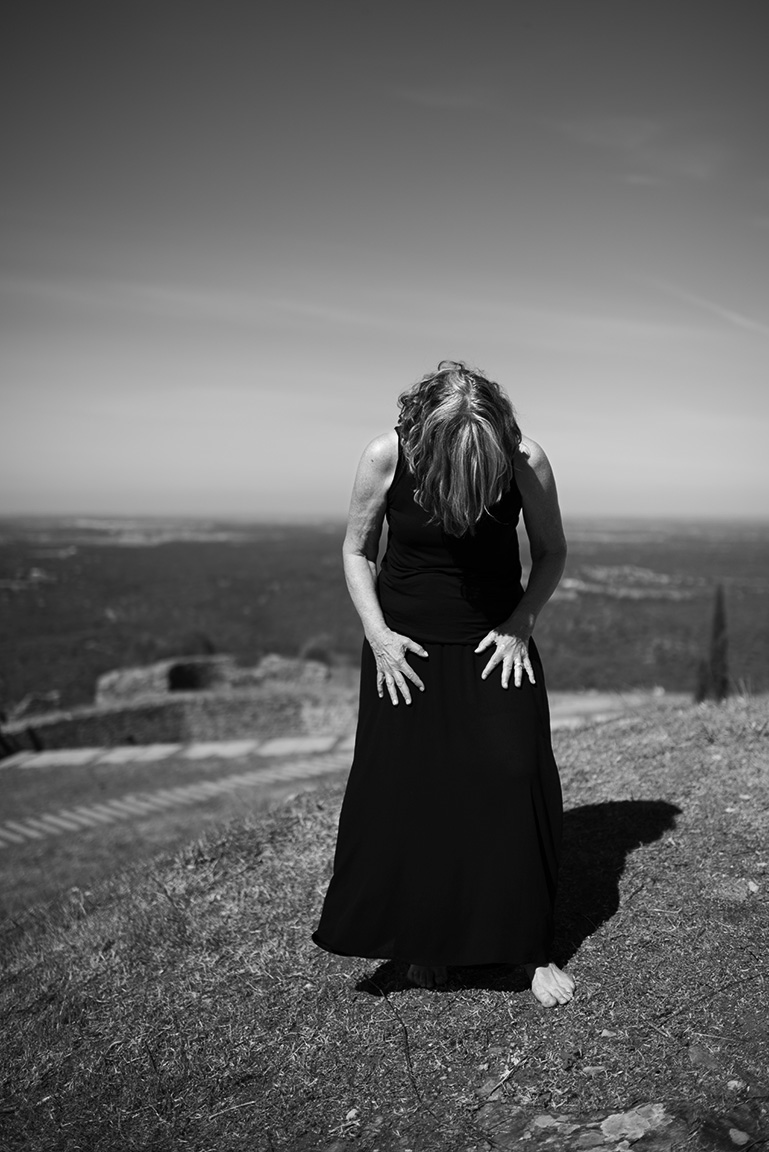 The second was taken in November of 2016 by Luis – Woman at the Canyon of the Bells / Mulher no Pego do Sinos. In this image the woman (me) is swathed in a black veil, crouched by the canyon’s edge. You see the beautiful textured rock above her and below her and the sharp edge of the canyon. She is rising, her hair covering her face again – she becomes part of the canyon / rocks / grasses.

Woman at the Canyon of the Bells / Mulher no Pego do Sinos, 2016

This third image is from the series titled Breath/ Alento – shot by Luis in October of 2016. Again it is the woman (me) in a ruined building with a large red curtain parting and opening to the sky and the trees – like a second breath or a beginning again. In Portuguese the word alento has several meanings: it means breath and respiration – but it also can mean nurturance, encouragement and inspiration.

I do not see these images as portraits of me – I don’t use my face for this reason. I think they are more universal and refer to a feminine connection to the elemental world – the world of mountains and canyons, rivers and trees, lakes and valleys, the mundane and the sacred. This physical and spiritual subjectivity is what I want to continue to explore and perform in this next series of works in Portugal and I am beginning again…