This post describes some of the correspondences and differences in my recent work and Helena Almeida’s work – in particular in regards to space and subjectivity.

“To try and open up a space, to get out at any cost, it’s a very strong feeling throughout my work. It has become a matter of condemnation and survival. I feel myself virtually always on the borderline, where these two spaces meet, wait, hesitate and quiver. It is a temptation to stop there and watch my inner process, living in a dream in two directions. But this is unbearable and swiftly something comes out of me, as if trying to surpass me. Anyway, I have succeeded to come out through my finger tips.” – Helena Almeida 1978

I recently found this quote by Helena Almeida in the catalogue from her exhibition in 2000 at the Centro Galego de Arte Contemporánea in Santiago de Compostela, Spain. I love the way she talks about space and her relationship to it, I have a similar physiological and primal relationship with space – in art and life.

I chose Helena Almeida as the subject for my “embodied research” project (thank you for the term Sandra Q. Firmin) because of my deep interest in and appreciation for her work both conceptually and aesthetically. I admire her diligent art practice where she has used her body as the subject in her work over the last 5 decades. I love the minimalism of her serial black and white images. I like how the blue paint alters your perception of the space of the photograph. Is it a photograph? Is it a performance? Is it a painting? I particularly admire the way she deals with the feminine subject – using her own body to convey inner states of mind without signaling a personal or autobiographical narrative. There is a naturalness and lack of conceit in her work, even though it is meticulously thought out. There are no costumes or disguises- she wears black clothing or white clothing, black shoes, it is always very simple. She choreographs her body in the basic space /neutral space of her studio/atelier.

In the above works from the series titled Inhabited Paintings  Almeida wrestles with the space by painting the photograph/performance with her signature blue paint. The blue paint alters the action so that there are several levels of dimension and space and time. The original actions in the mirrored space offer the image of Almeida both “real” and reflected, then Almeida paints on the image – she paints on the reflected image of herself as well as the “real” image of herself. Almeida is constantly questioning the spaces her body is occupying. What is the back? What is the front? What is the reflection?  I think this questioning of the space is very sophisticated and interesting.

The two works above of Almeida’s, Thick Black and Vanishing Point, were inspiration for the works I first made in the studio and on the terrace of the Obras Artist Residency in 2015. Almeida chose paper as the ground and I chose white artist canvas for the floor of the studio at Obras. The Obras studio is pictured below.  I placed various cloth constructions  – a red rosette, a black square with a chair, a circular piece, and a rectangular construction on the white canvas ground. These cloth constructions reference my own geometric drawings. When I entered these flat fabric constructions on the ground of the studio and the terrace, I considered that I was “inhabiting” these geometric spaces in a similar manner to Almeida’s idea of her “Inhabited Paintings.” Photographer Luís Branco climbed up to the top of the ladder to shoot this series of images and it is an odd and distorted perspective. There is a strange sense of dimensionality and space in these images and of my interactions with these spaces. 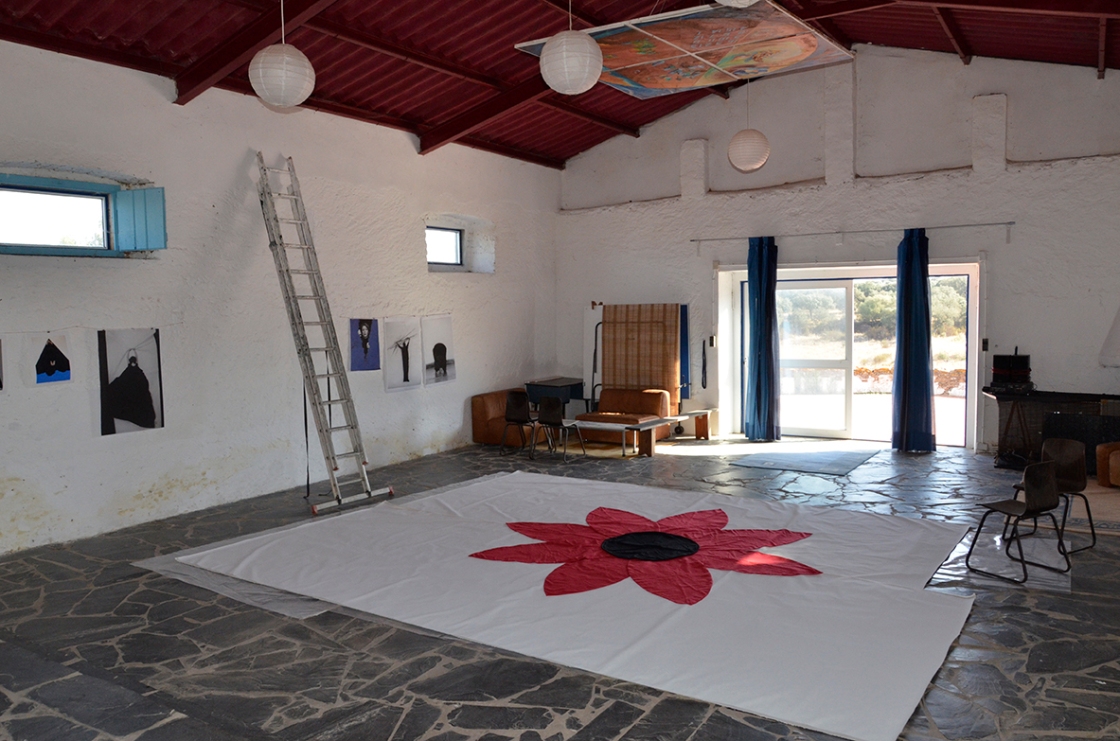 The studio at Obras Artist Residency with the white canvas and red rosette.

I am coiled “within” the flower then I am emerging “out of” the flower. The texture of the red cloth of the flower and the white canvas background also offers another illusion of dimension and space in the images. 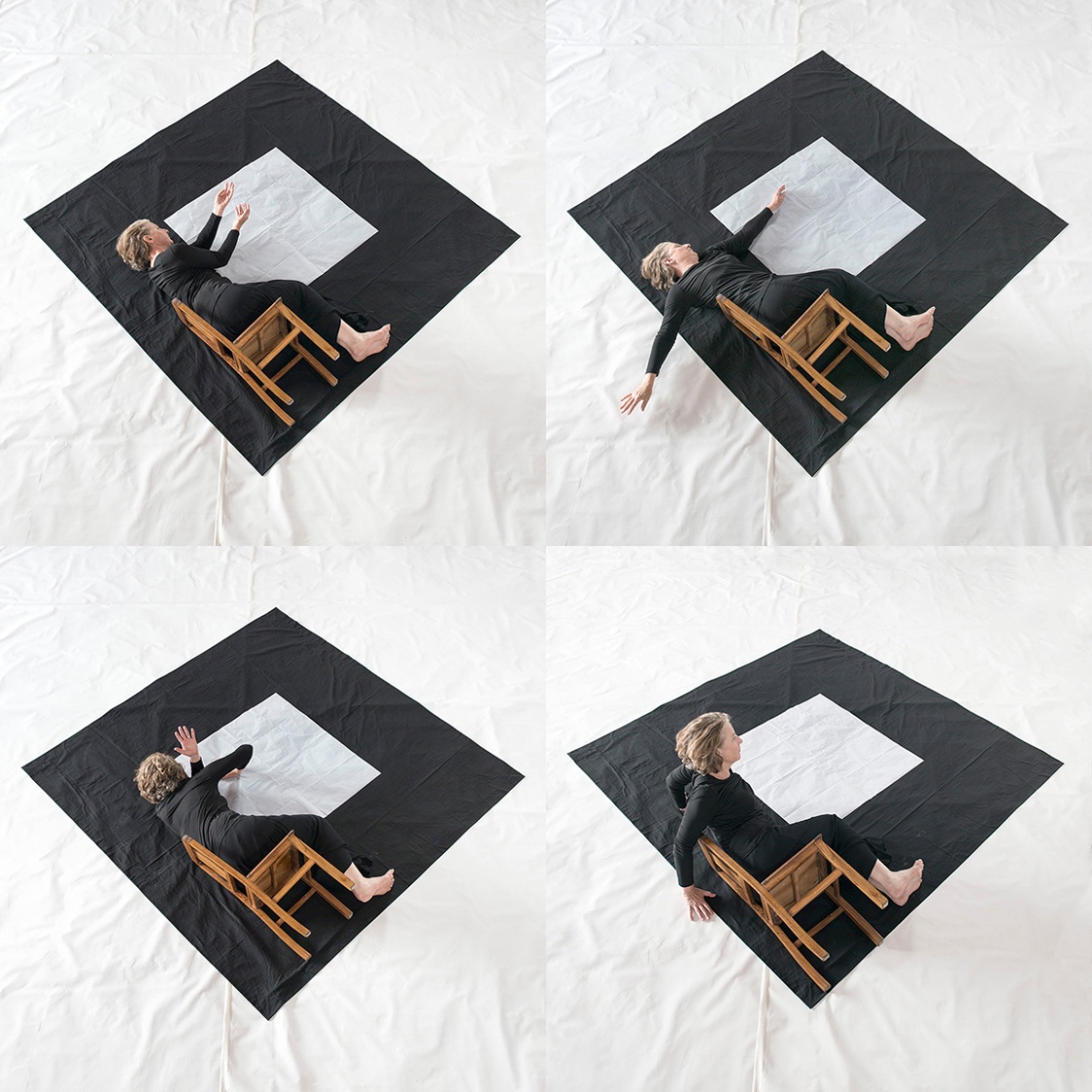 Sherry Wiggins, series of four, Chair/Cadeira, 2015, color photographs, 24 x 24 in. each, (images by Luís Branco). Installation at the Palacio in Estremoz, Portugal.

We installed these Chairs on the floor on black cloth for the exhibit in the Palacio in Estremoz. 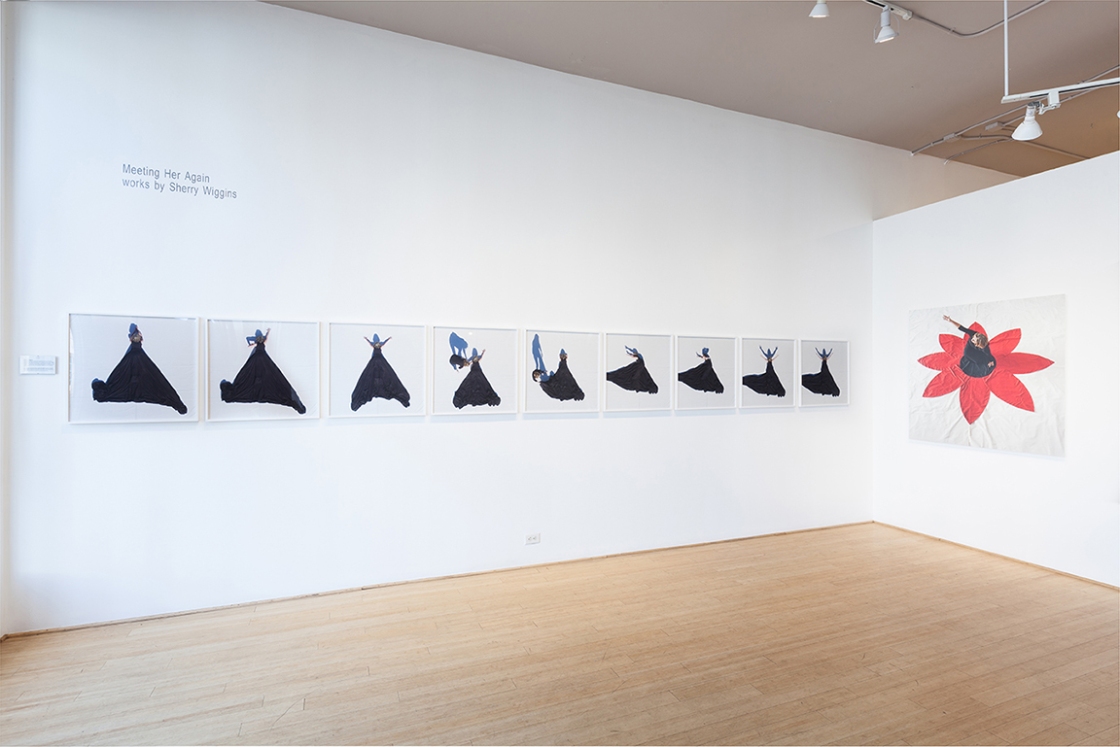 Performing the Drawing is shown installed above. I am not sure why this series of nine images are so successful but I think it has to do with the real and illusionary layers of space and dimension in the images. These images were taken with a camera on a drone on the terrace at the Obras Artist Residency by Rui Fernandes.

Sherry Wiggins, Performing the Drawing, 2015, one of nine color images, each 24 x 24in. (images by Rui Fernandes).

Shooting Performing the Drawing on the terrace of the Obras Artist Residency. (image by Rui Fernandes)

Sherry Wiggins, Performing the Drawing, 2015, one of nine color images, each 24 x 24in. (images by Rui Fernandes).

There are several levels of space and dimension in this series of nine images– the flat terrace outside the studio, the crinkled white canvas, the figure in the black cloth (me) gesturing, the blue shadow cast on the figure(s), the upright second figure (Cydney Payton) adjusting the fabric. The photograph then collapses all these other dimensions into a wholly new dimension. Even the pixilation of the image adds a sense of spaciousness to these images.

After working in the studio and on the terrace with the white canvas cloth I wanted to work outside in specific architectural and natural settings in Portugal. Almeida works almost exclusively in the space of her studio. This was a definite departure from Almeida’s practice back towards my own –  the landscape and architectural environments have always played a large part in my work. Regardless of the spaces and environments I am performing or inhabiting within, I am still searching for a similar sense of the female subject which is not autobiographical nor portraiture and is similar to Almeida’s sense of subject.

Filipa Oliveira, a curator at the Forum Eugenio de Almeida in Evora, wrote about the way Almeida portrays herself in her work.

“Helena Almeida refuses the concept of self-portrait as a transparent reproduction of an individual personality. There isn’t an autobiographical aspect in her work: she is not herself. The spectator who attempts to unravel the subject author in her portrait is left wanting. Her images usurp a tautological desire for meaning that the immediate and pseudo-transparent nature of photography seems to allow. She takes on a mask-without ever recurring to disguises or makeup – in order to be photographable. As the main character in her works, Almeida introduces in them a paradoxical element: while she makes the author visible (and never stops being the author), the artist continuously postpones the possibility of knowing her identity.” – Filipa Oliveira, from the catalogue Helena Almeida: Inside Me, pg. 7.

There is a sense of the spaciousness of the earth and the sky and of the woman’s /my connection to the vast horizon. I am on top of the mountain at Evoramonte. The image is still quite abstract and the feminine subject is “any woman” albeit an older woman. In these more specific settings a sense of the mystical and mythical feminine starts to emerge. In these images outside you see more clearly how I tend to use my body to relate to spaces, while Almeida tends to use her body to create space, like in her images below.

I think there is a similar though more abstract sense of feminine presence in Almeida’s series I Am Here above and also in her series Inside of Me below. It does seem archtypal and primal as well.

Helena Almeida, Inside of Me, 2000, black and white photograph. 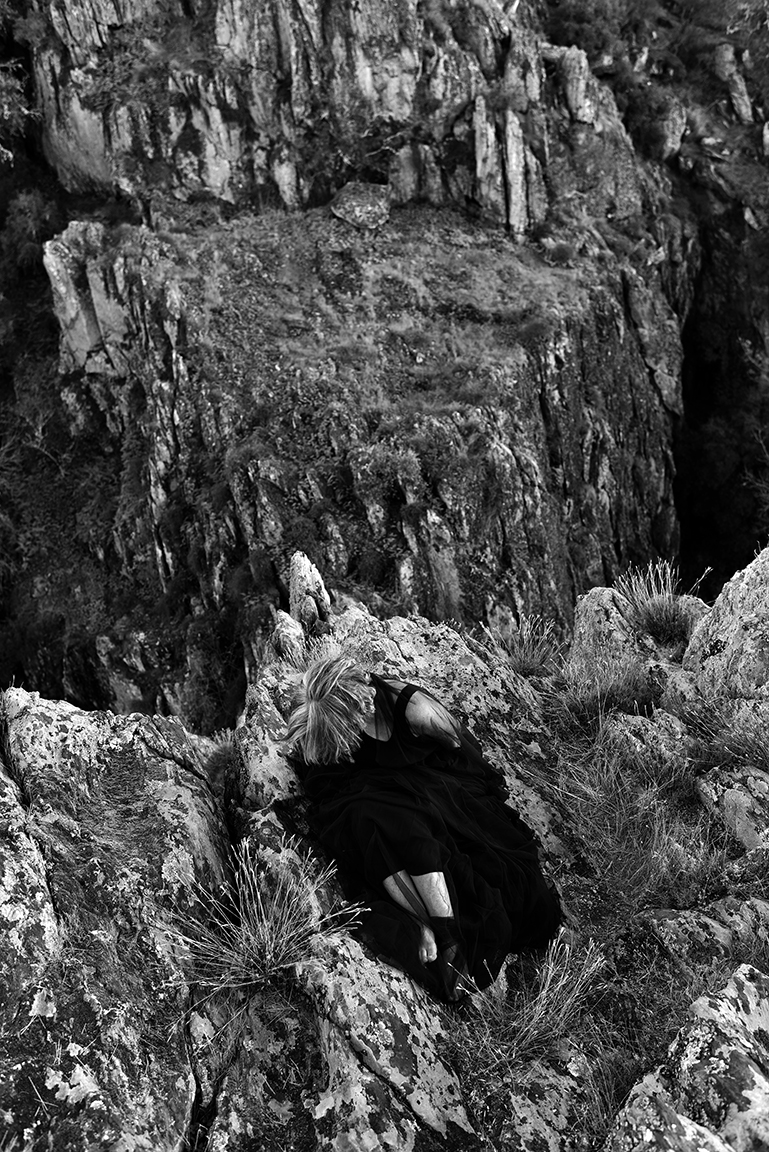 Sherry Wiggins, Woman in the Canyon of the Bells, 2016, black and white photograph, 48 x 32in (image by Luís Branco).

In this final image above that Luís Branco took during a photo-shoot in November of 2016 I am still performing the feminine in a Helena-ish way. But the mystery and beauty of the place dominates. This place is called the Pego do Sino or Canyon of the Bells. It is as if I am part of this place/ space. Luis took 100’s of images over several shoots and hours to get this one. I think this is the mistresspiece /masterpiece of the collaboration in Portugal. I wonder what Helena would think?

I will end with a quote by Helena Almeida. This quote and the quote at the beginning  of the post are both from the catalogue from Almeida’s exhibition in 2000 at the Centro Galego de Arte Contemporánea in Santiago de Compostela, Spain. I love reading her own words (translated in English) and her concept of plurality vs. subjectivity. I think this is similar to my own sense of  portraying / performing an archetypal presence or a more universal feminine subjectivity.

“They’re not self-portraits because I don’t find in them my own subjectivity, but rather my plurality, which I make appear in a kind of stage setting. Would that they were self-portraits! In any case, I can say that they are stage settings executed within a small or sometimes large format (in the sense painting/theatre) in which I appear as a fictional character. These scenes are made as if they were the narrative of a spark –appearance / disappearance – recounted with the silence of sign language, projections which I would like to contain the deep sound of the body; images that tell what happens before the image, before movement as thought, before history and, above all before intentionality. And to be able to see them move into the sumptuous category of the meaningful. I’ve wanted to make a great effort to try working with that empty, and dense dimension of pre-movement, of pre-event, with its dark, deformed weight. A kind of penultimate expression.” – Helena Almeida 1994