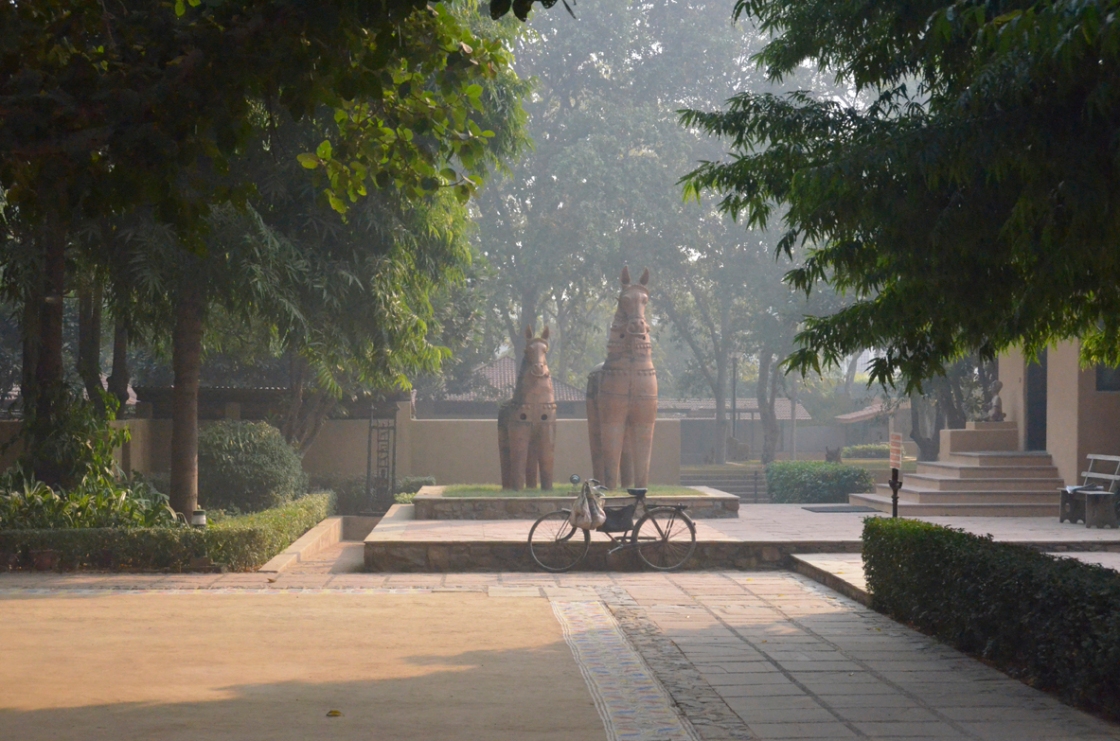 Happy winter solstice and to my friends in the South happy summer solstice! It is a month now since I left India and the residency at Sanskriti. Most of my blog posts have been about my research and my process with Nasreen Mohamedi and I have not written much about the social and physical experience of the residency – which was great. The physical circumstances of Sanskriti; of living in the outskirts of Delhi (about a hour walk and metro ride into Delhi,) in a beautiful compound with lovely gardens and three small museums on site created a very special kind of atmosphere.

While I was at Sanskriti there were about 12 -14 visual artists in residence, though they welcome writers and academics as well. I was there for the shortest period (three and a half weeks,) there were artists there for 4 weeks, 2 months, and the longest was for four months. Many of the artists were there on fellowships through different sponsors. I was one of the few artists paying the full rate for my studio apartment and three meals a day – which was still quite reasonable at $55 a day.

During the day there is a Sanskriti staff member available, Ravindar, to help all the artists set up whatever activities they need help with; trips to museums and galleries, help with printing and supplies, whatever. There are also many staff people at Sanskriti who are running the museums and all the various events that take place there. Mr. O.P. Jain is the man who built the place. He is in his 80’s and comes almost everyday to Sanskriti to oversee things. He is a wealthy Jain businessman with a big commitment to culture and he has created a beautiful cultural institution.

For me though, my most intimate and memorable interactions were with the other artists. Eating together is of course an important activity. We ate breakfast, lunch and dinner together in the dining room and on the tables in the garden. All the vegetarian food was prepared by a wonderful staff and was very good: breakfast was very minimal, lunch was the main meal of the day and there was always a delicious dal and some kind of rice and several mild vegetable curries and a paneer dish and homemade chapattis and dessert. Then tea was served late afternoon and dinner was lighter than lunch but delicious. 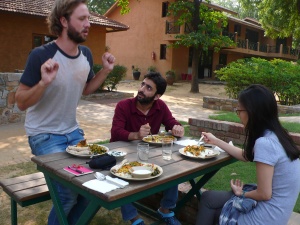 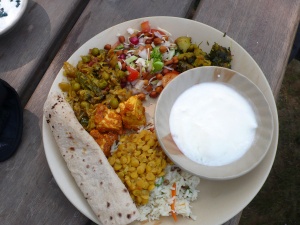 But it is really art that brought us together. I got to be quite close with several of the artists and as a whole it was a very congenial and talented group of artists. There were three young Indian artists there on a special program for a month. I became close with Ankush quickly, partly because he spoke such good English and was so kind and helpful, but mostly because he is such a bright and passionate artist. He is Punjabi and Kashmiri (Northern) by birth but has been living in Delhi for the last several years. The images below show Ankush working on his large pastel drawings in the garden at Sanskriti. 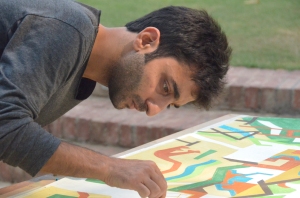 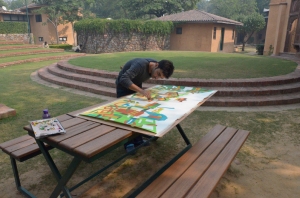 Lokesh is from Bangalore in the south and is one of those artists who just has “the hand and the eye,” his drawings and paintings are fanciful and joyous. I really enjoyed him, we communicated as he said through the “international language of art.” Below are images of Lokesh with his sketch book. The bottom image shows Ankush and I and Lokesh having our morning coffee. 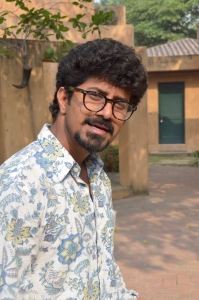 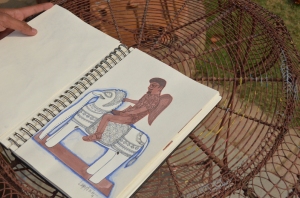 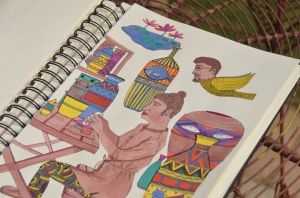 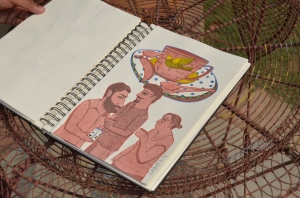 The other young artist from India was Sikan, who is a very talented conceptual artist from Orissa. All three of the Indian artists were very interested in my project with Nasreen Mohamedi and I think they learned quite a bit about Nasreen as well.

Then there was Yuni, who is a very talented artist from South Korea. She got her masters at Rhode Island School of Design a few years ago. Somehow we “found” each other very quickly. We figured out we both have a very similar conceptual and aesthetic viewpoint, and truthfully I just love her. She was at Sanskriti on a UNESCO fellowship. She created a video titled “Between These Breaths” with a computer program in which she inputted the numbers 1 to 9 in several of the many languages of India – Sanskrit, Hindi, Urdu, Tibetan and some other ones. The video is a beautiful layering and expansion of all these numbers. Below you see pictures of the projection of her video on the carved wooden screen in the amphitheater during our group exhibition, also a picture of Yuni and I. 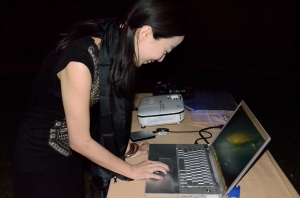 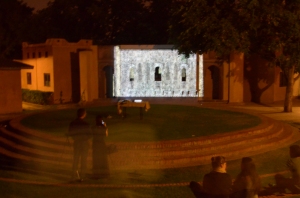 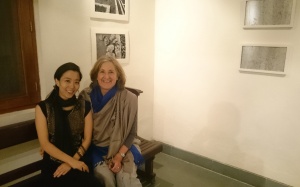 Vicki is a wonderful artist and person from Melbourne who was at Sanskriti on a major fellowship while finishing her PHD in studio arts. This was Vicki’s fourth tour at Sanskriti and in India and she was remarkably generous with her knowledge of all things Indian. Below are pictures of Vicki and part of the installation she made for our group exhibition. 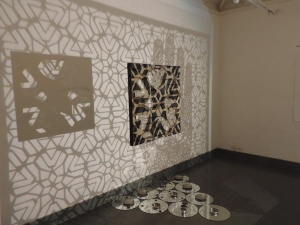 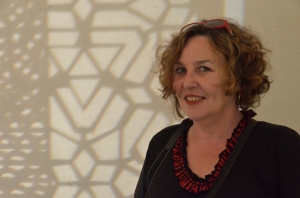 Then there were the young Australian artists from Adelaide – Genevieve, Lucy, Nick and Jarred. They were all there on a special program; studying various Indian art and craft forms. They are all very talented artists and very FUN people.

I developed a special relationship with Genevieve from the start as well. I love one of her projects that she started while in India. She and her comrades were very game and walked and rode the metro all over Delhi. At one point she ended up in one of the “complaint” offices in the metro and in some kind of shuffle walked out of the office with one of the “complaint books.” She then took this book and made beautiful drawings on the complaints, she called the drawings “little prayers for the complainers.” 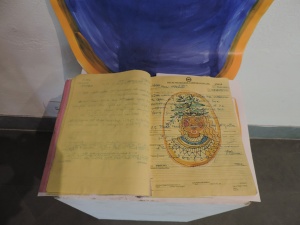 Anyway the comradery, the trips all over Delhi, the late night Kama Sutra Tarot readings, the great dance party after our exhibition, the inspiration and support that I found while at Sanskriti with this group of artists was truly wonderful. I have not mentioned some of the other artists I met; Emily, Mirjam, Lee and Miranda – all talented artists and good people whom I was happy to meet.

This was my first bonafide artist residency, though my work and travels in Palestine had some similar aspects- of meeting wonderful artists doing great work and forming bonds through art. I chose this residency in India, partially because my relationship with Nasreen is so strong, and partially because I thought I should go to India again before I am too old. India is rough, and it is a very long distance to travel. However my belief in this concept of the artist residency is confirmed. I am going to try and continue to participate in the artist residency model for the next few years with my various projects with these remarkable women artists of the 20th Century. I still have much work to do with Nasreen at home in my studio, but I am looking forward to my next project which I think will be with artist Helena Almeida as my inspiration in Portugal sometime in 2015. I will keep you posted. 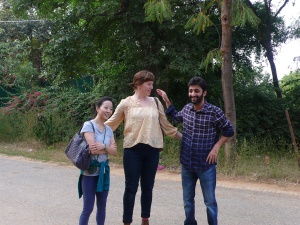 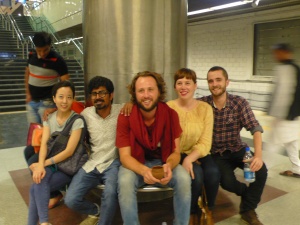