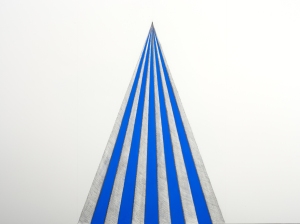 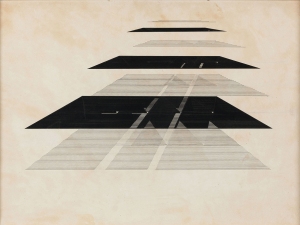 One of the ideas I find most compelling in Nasreen’s body of work, and the criticism and commentary on her work, is the sophisticated set of ideas about the negation of the self, or self-naughting. Critic Geeta Kapur asserts that Nasreen’s work was clothed in a paradox: the experience of the self and the negation of the self happening at the same time. Kapur explains: “I am not speaking contrarily if I say that Nasreen’s work is about the self and that it is simultaneously about self-negating as well, for every passionate negation is a mystical triumph in the way of becoming. Self-naughting, akimcanna, is a refusal of soul in favor of a more abstract principle of mind; it is standing still from the thinking of self, and the willing of self.”[1] In other words, Nasreen’s artwork intimates both her own subjectivity and her own lack of ego concurrently.

Indian artist Nasreen Mohamedi (1937 – 1990) traveled extensively through out the Middle East, Japan, Iran and the United States. Zen Buddhism, Islamic architecture, Sufism and modernist abstraction play major roles in her work. Nasreen photographed many ordinary subjects such as the warp on a loom, graphic markings on a road, and patterns in the sand. She was also drawn to Mughal architecture and Modernist buildings. There is an emphasis on technology and structure in her subjects. But there is also relativism with all her subjects, a non- hierarchical sense of space and of her own placement there in. Mohamedi’s delicate and linear drawings in pen, pencil and ink and her photographs convey a particular relationship to space. This space is personal and idiosyncratic; physical and transcendent; and metaphysical and otherworldly.

Like my own work in drawing and photography, Mohamedi’s art traces a subtle relationship with the body, the self, and space that is non-subject and object oriented. My own drawings are grounded in my phenomenological relationship to space; both the experience of metaphysical inner space and of relative or physical outer space. As Mohamedi did, I have spent significant time traveling in the Middle East, Japan and India. My work draws information from the “East”– aesthetically and spiritually. Similarly to Mohamedi, much of my multi-disciplinary art practice is based on my Buddhist beliefs and philosophical and spiritual studies.

I have posted below some more examples of Mohamedi’s drawings, my drawings and a few of her photographic images as well.