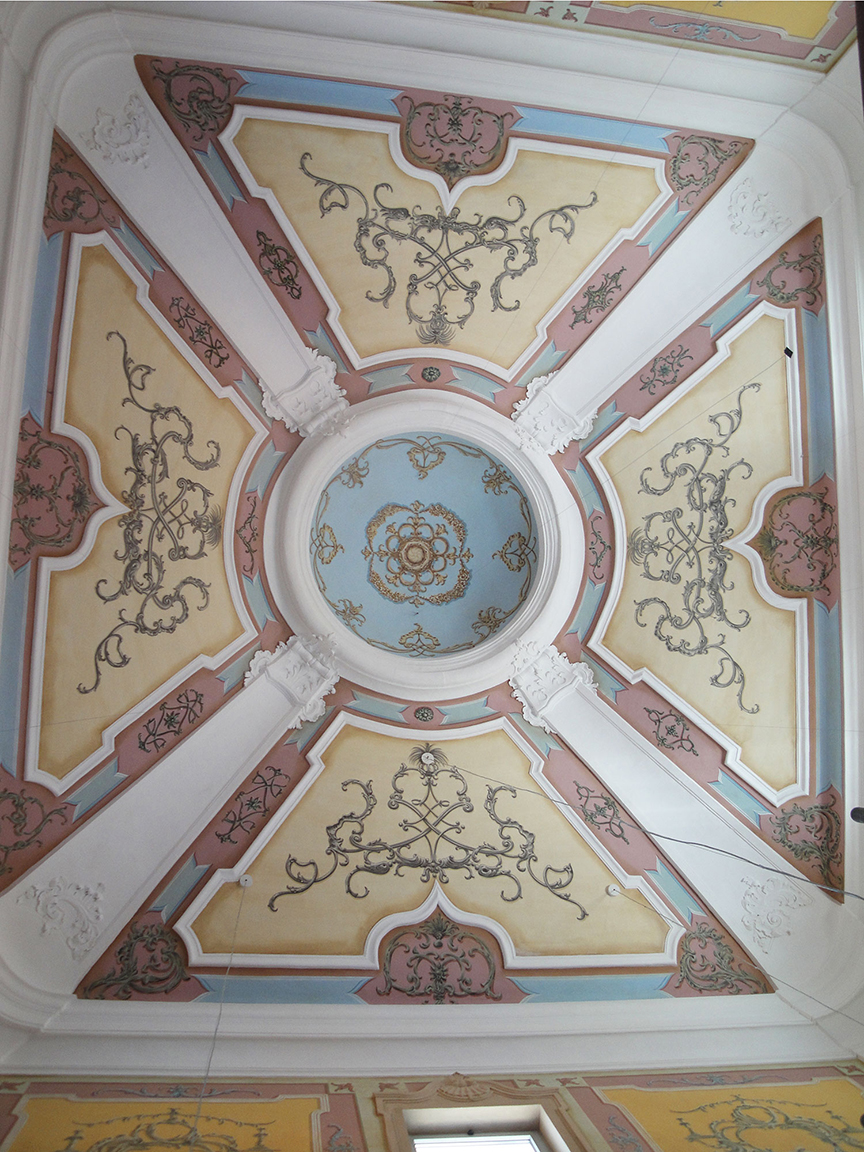 The exhibit Reencontrando-a / Meeting Her Again in collaboration with Luis Branco in Estremoz, Portugal is most likely the first and last time I will have an exhibit in a palace. Since returning home just a few days ago I have done a little research on the history of the The Palácio dos Marqueses de Praia e Monforte in Estremoz.  It was actually built during the time of King Joao V in the beginning of the 18th century as a government building and later acquired by the Marquis of Praia and Monforte. It is now owned by the Municipality of Estremoz and used as a museum – they have restored this building beautifully in the last few years. The museum rooms are all on the second floor of the building with beautiful shuttered windows looking out to the street. 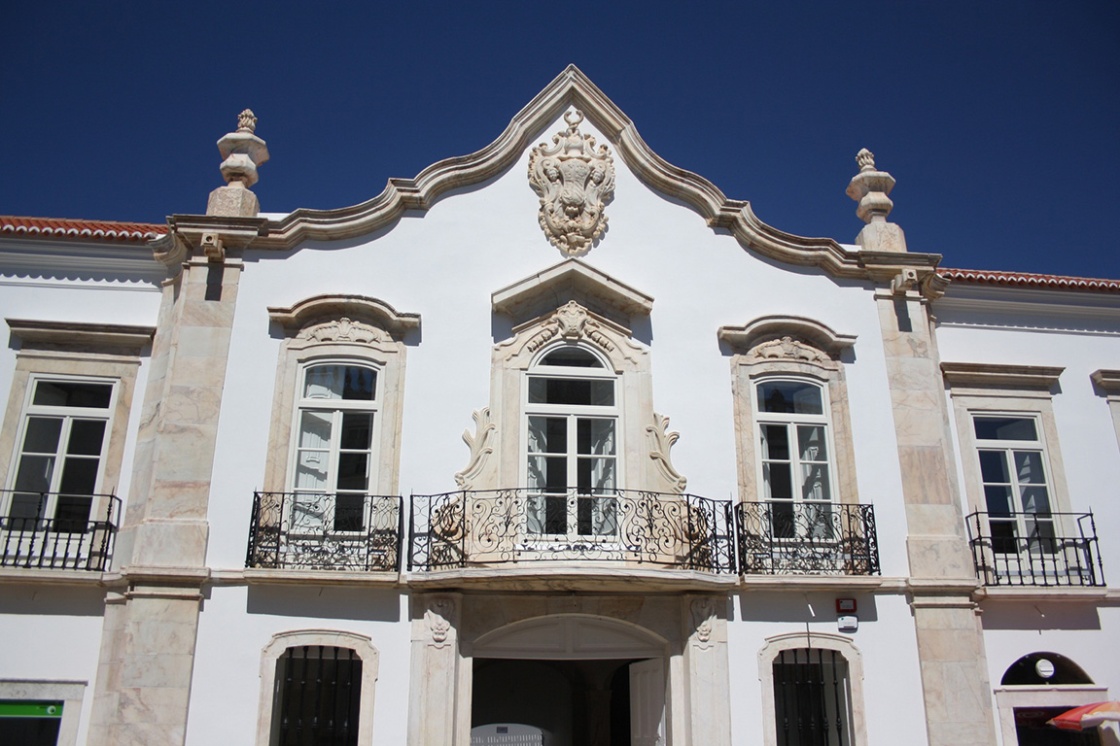 Each room in the Palácio has a different architectural scale and quality. We installed the 40 individual works and 6 different series so that they would fit in these special spaces. All the images in the exhibit were taken within 10 or 15 km of the Palácio so people visiting the exhibition are familiar with many of sites that we used. All of the images in the show and the installation images of the exhibit were made in collaboration with Luis Branco unless otherwise noted. 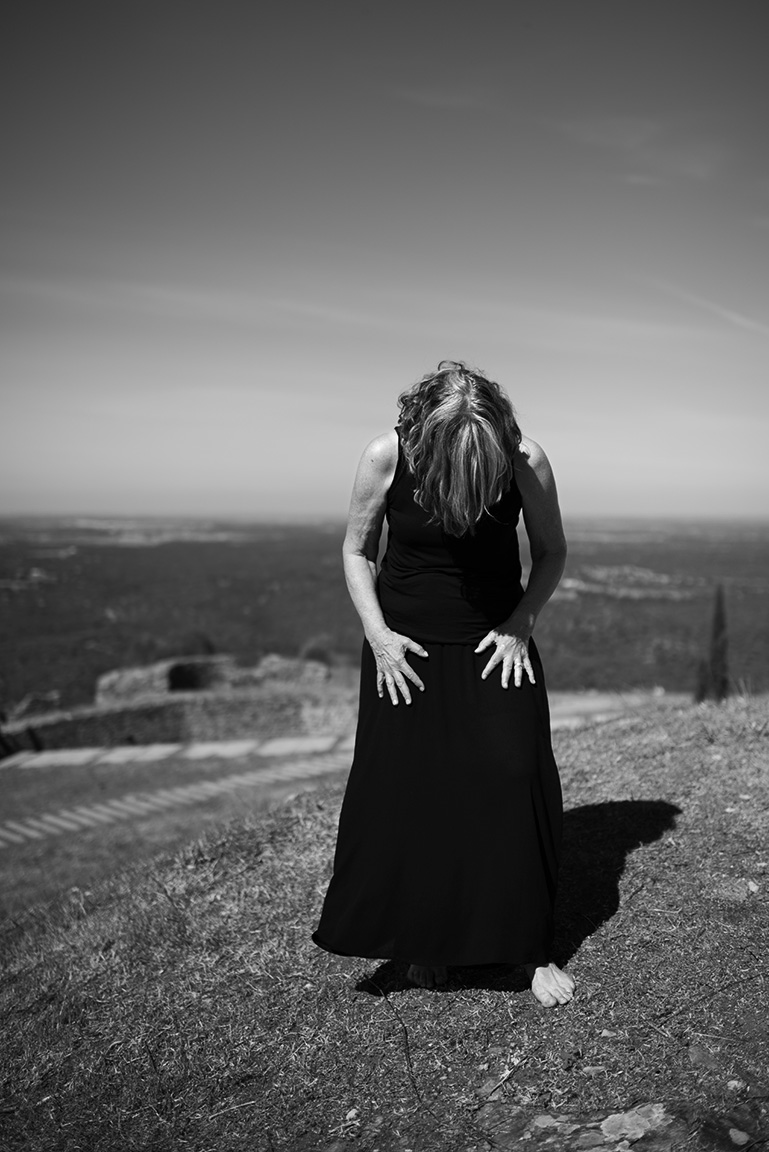 This entrance image to the exhibition shows me standing on the grounds of the walled city of Evoramonte near the Castelo de Evoramonte. The history of Evoramonte and of the Alentejo region in general goes way back to prehistoric times, many different peoples have lived in this area that is southern Portugal for a very long time.The castle / tower as it stands now was completed in 1531 during the reign of Manual I and was designed by Francisco de Arruda. 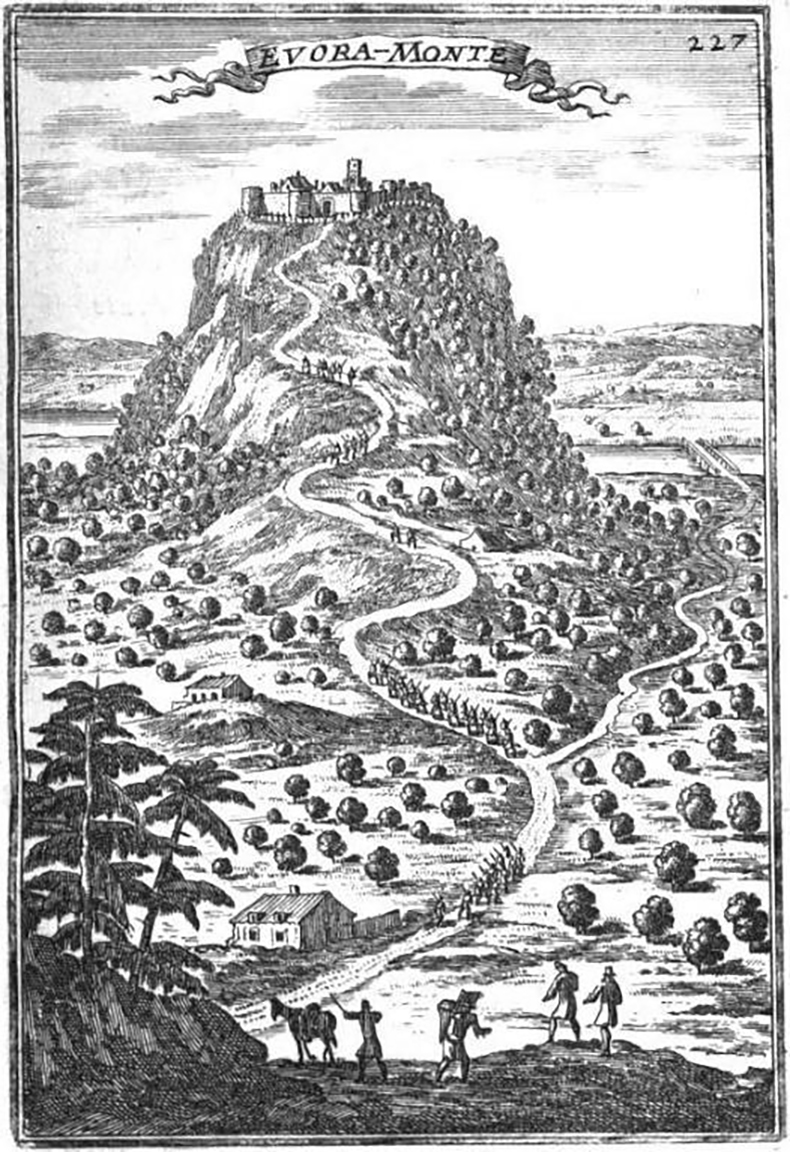 An engraving from 1684, depicting the walled town of Evoramonte, with the tower in the center.

I love this engraving of Evoramonte. The location of the Obras Artist Residency and Herdade de Marmelaire would likely be where the people are located on the bottom of the picture. The houses in this area still look very similar.

The first room in the exhibition hosts the series titled Horizonte / Horizon. This is a series of 7 small black and white images shot by Luis Branco in 2015 showing a woman / me with a black cloth performing various gestures. These images were all taken on the top of castle at Evoramonte on the tiled terrace. They look historical and contemporary at the same time, a woman with a big sky above her with some kind of abstract architecture containing her. 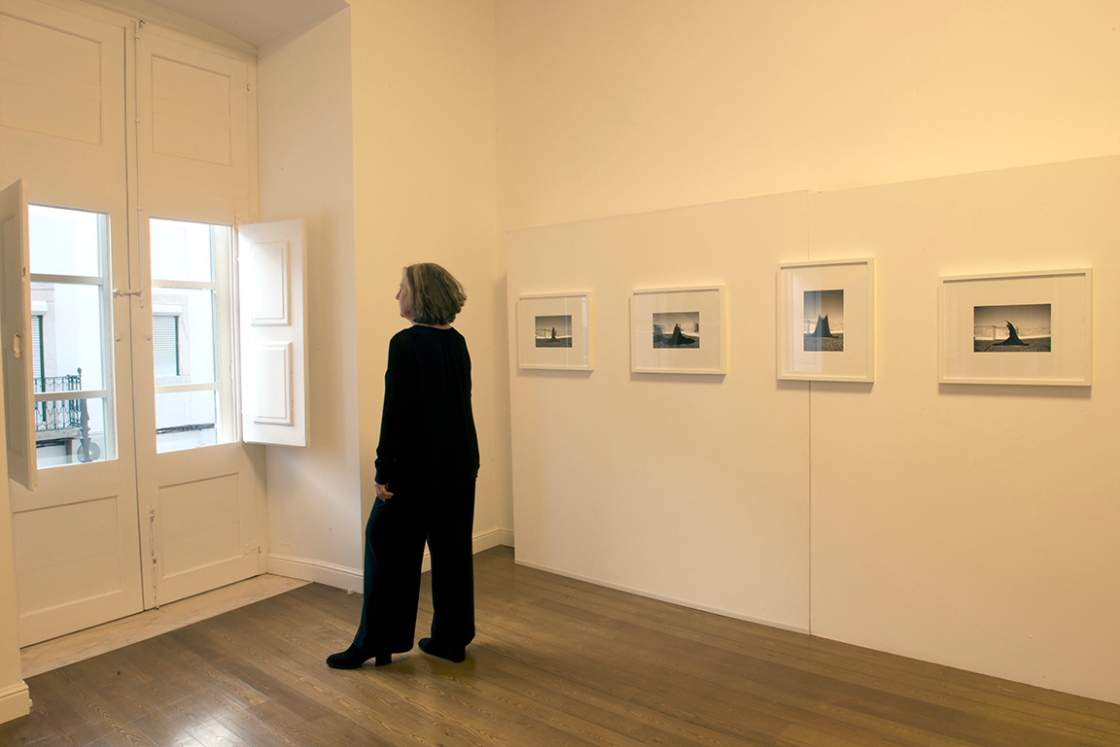 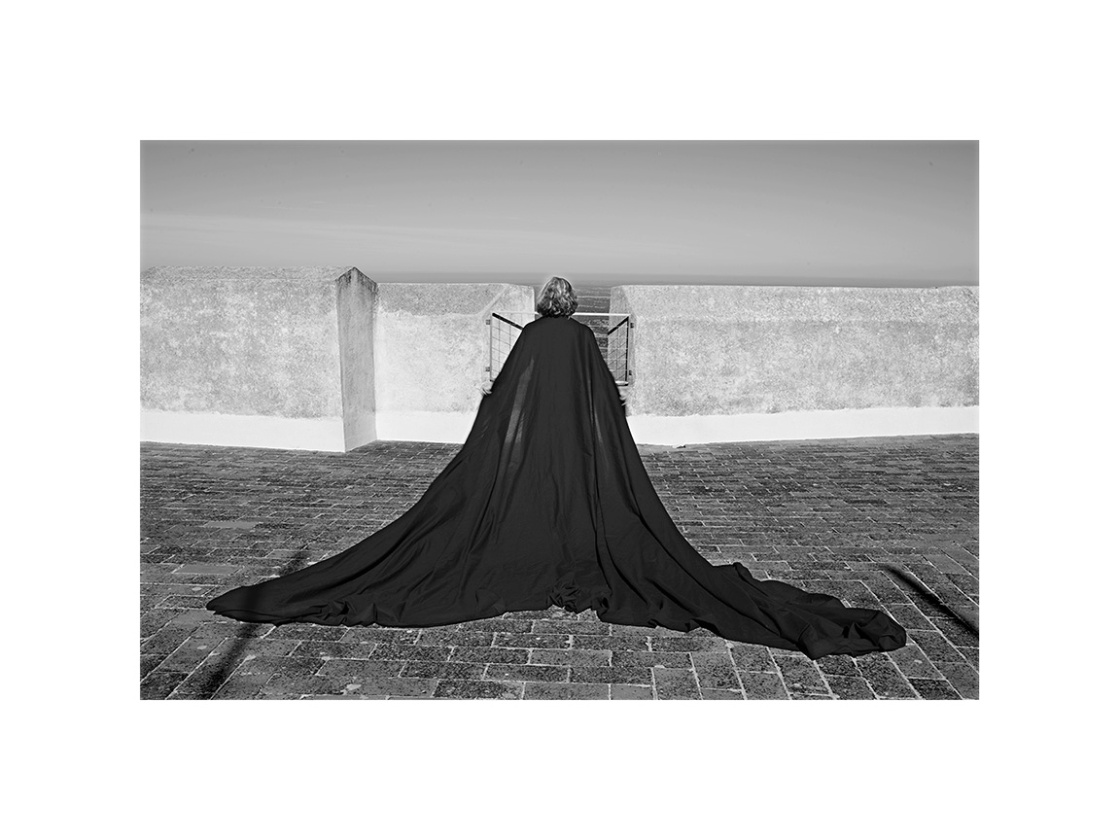 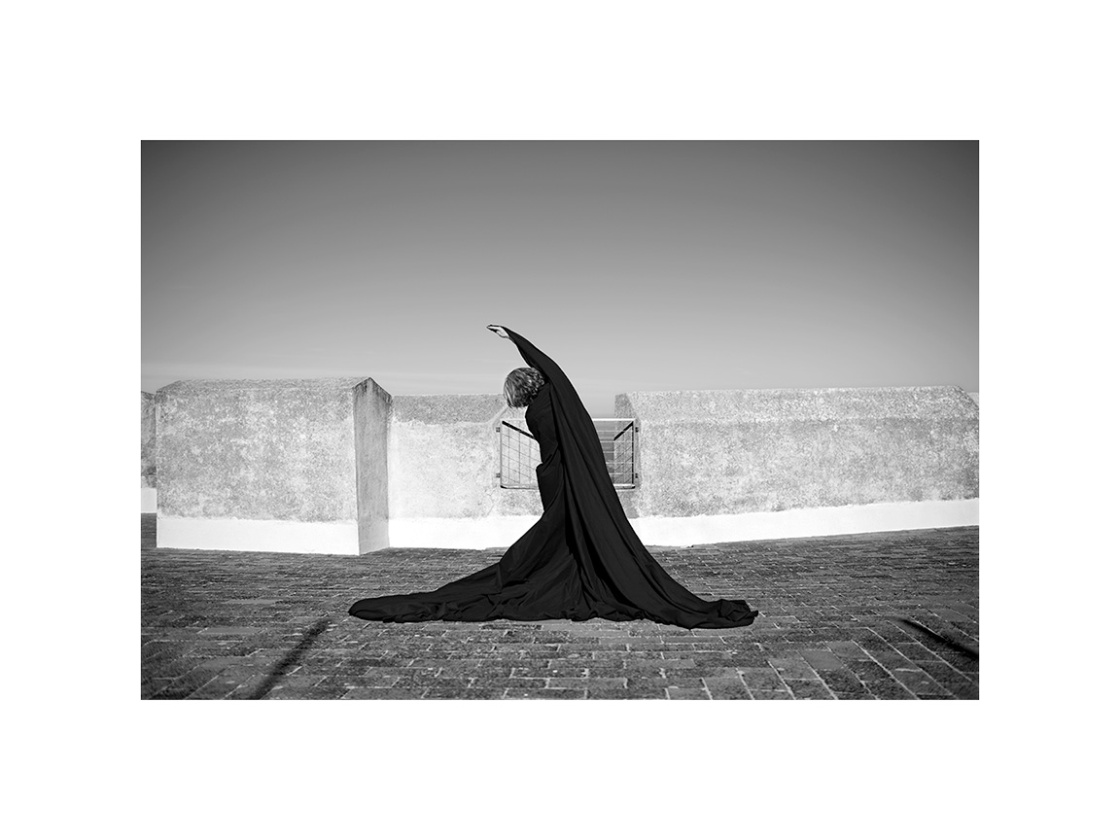 The second room in the exhibition is an elaborately decorated room in pale green and rose shades. We chose the diptych Flores / Flowers for this special room. 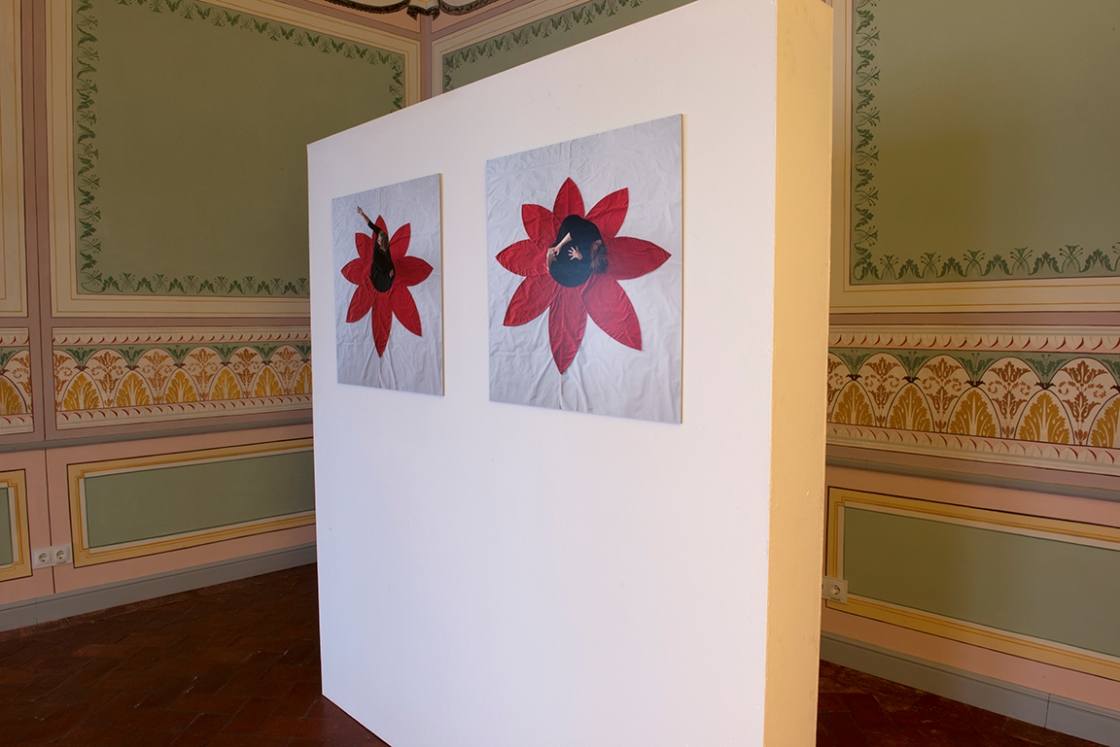 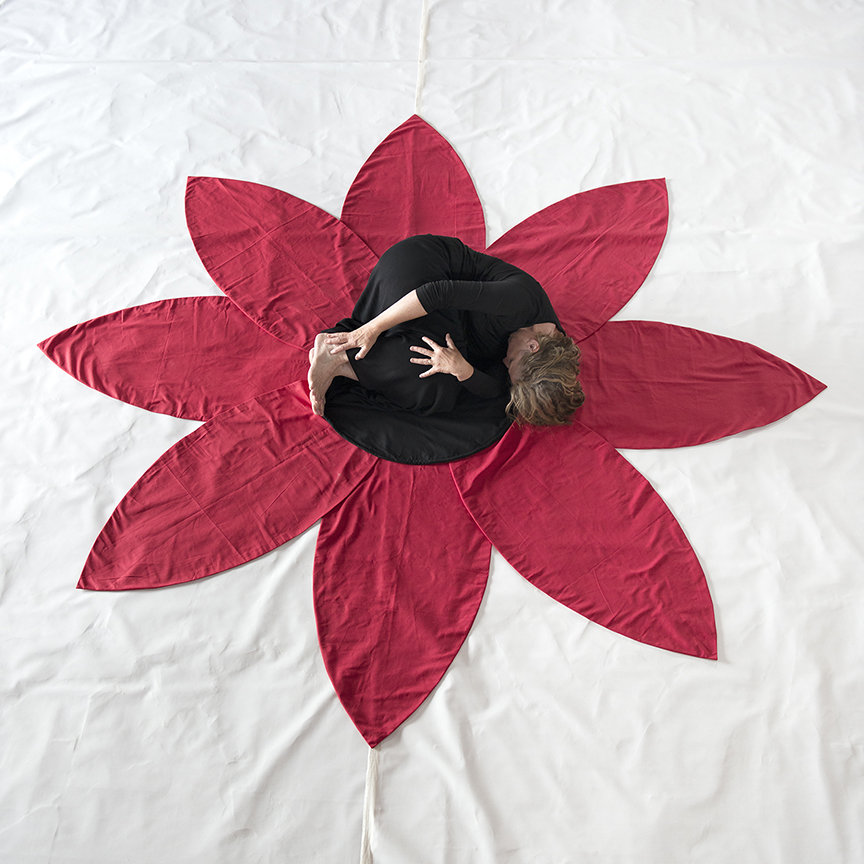 The third room is the largest of the rooms in the Palácio – with a tall white plastered ceiling and dark wooden floors this room hosts the series Reencontrando-a / Meeting Her Again that is also the title for the whole exhibition. We placed the red and black fabric carpet on the floor and the two wooden chairs that were used in several of the images in the show. Three black and white images show The Woman at the Gate at Evoramonte, Woman on the Tower and Woman at Herdade de Marmelaire all taken by Luis Branco in 2015. 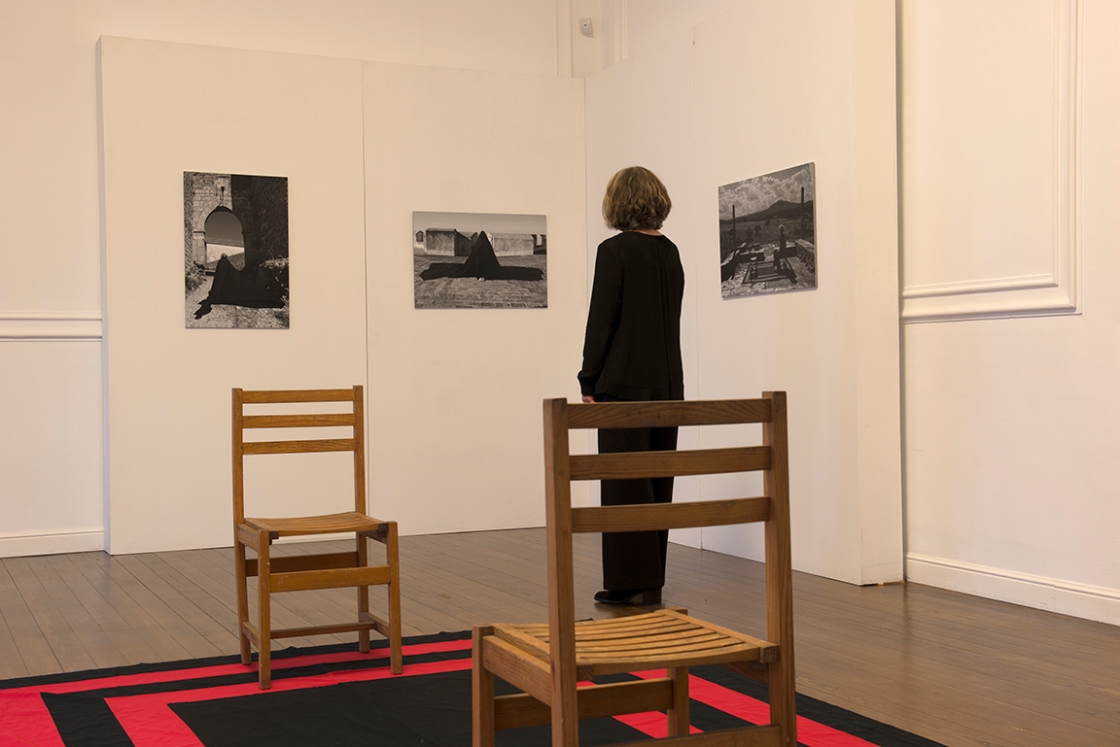 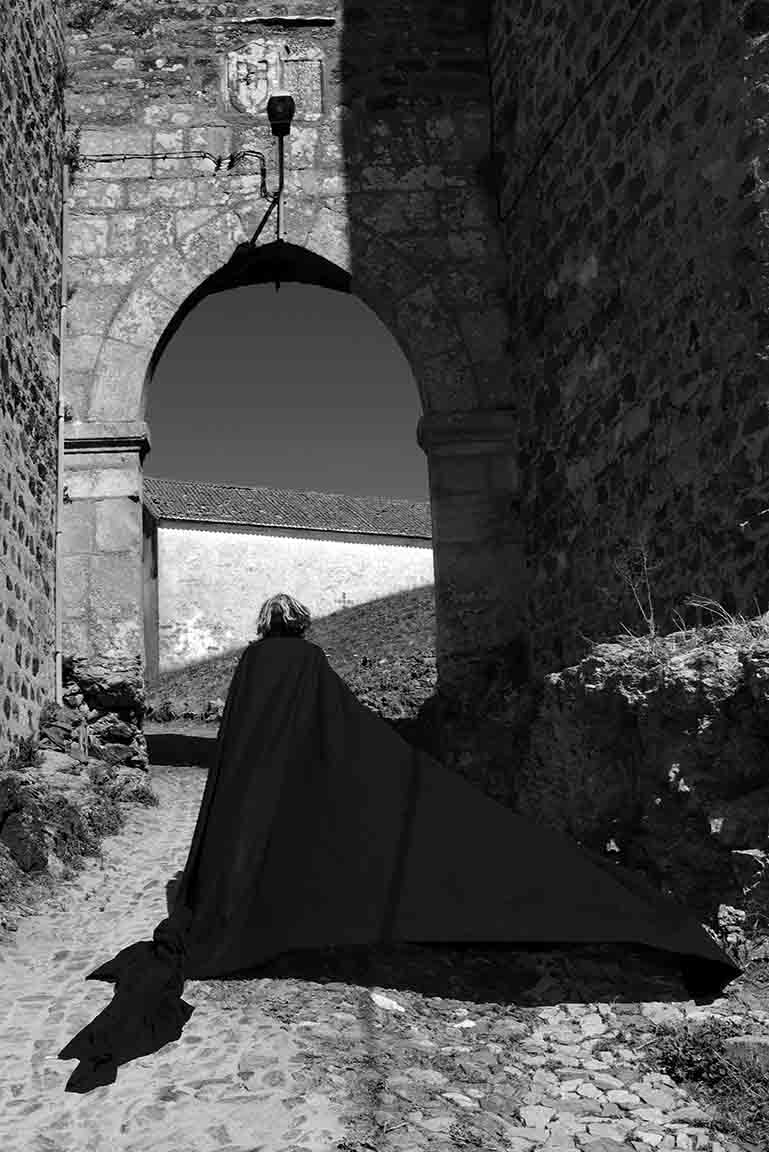 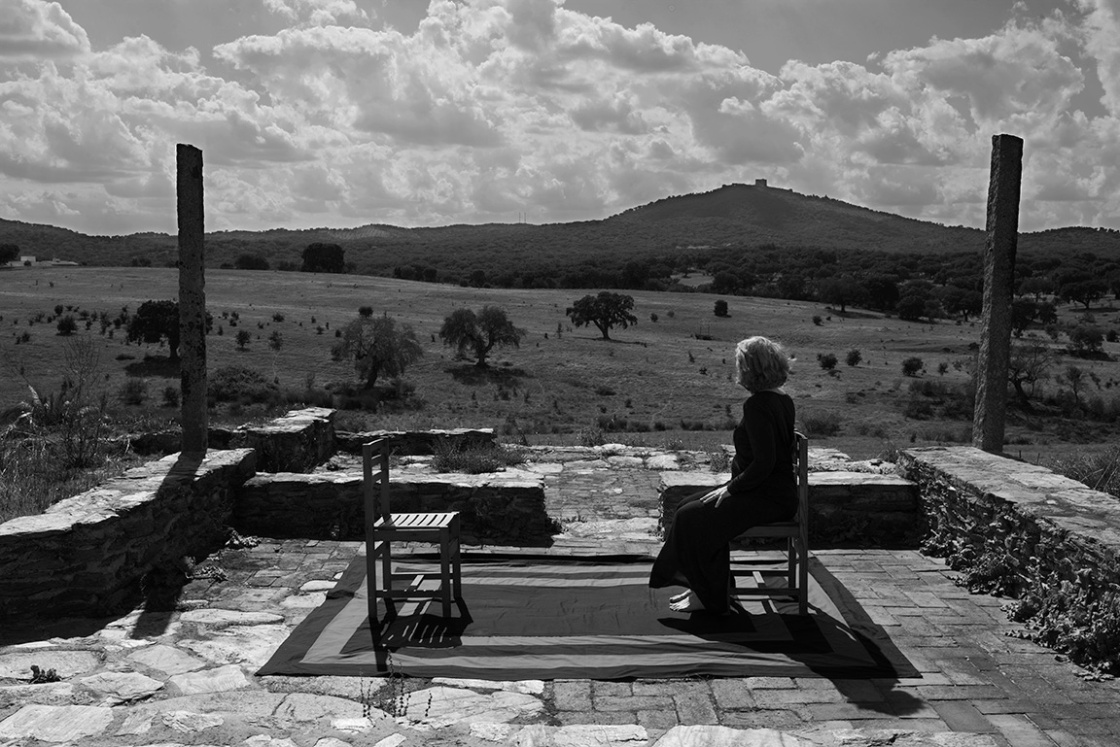 The second set of three large black and white images in this large  room in the Palacio are titled Mulher de Pego do Sino / Woman in the Canyon of the Bells and were all taken in the Pego do Sino near Herdade de Marmelaire in November of 2016 by Luis Branco. There are many myths and stories about this special canyon that holds water in its depths – stories about powerful goddesses / deusas and shamans and other holy men and women practicing and praying in this canyon. These black and white images portray a kindred connection to this magnificent place. 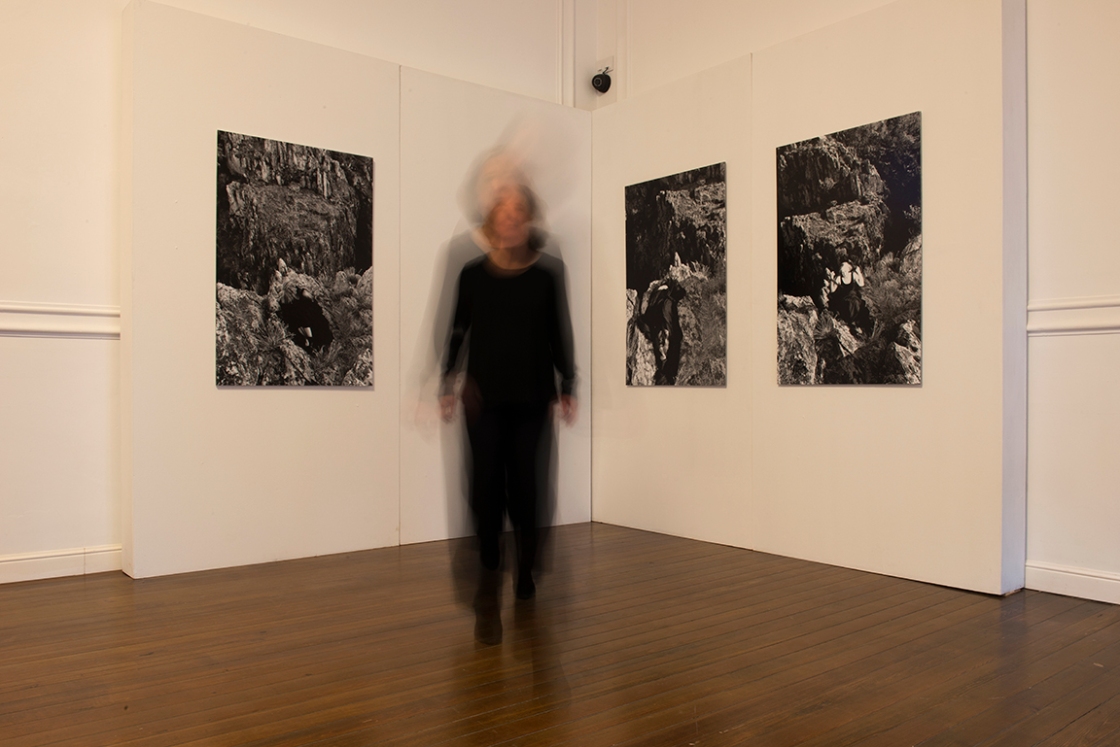 installation of Mulher em Pego do Sino / Woman at the Canyon of the Bells, 3 black and white digital prints, all 48 x 32 inches, images by Luis Branco, 2016 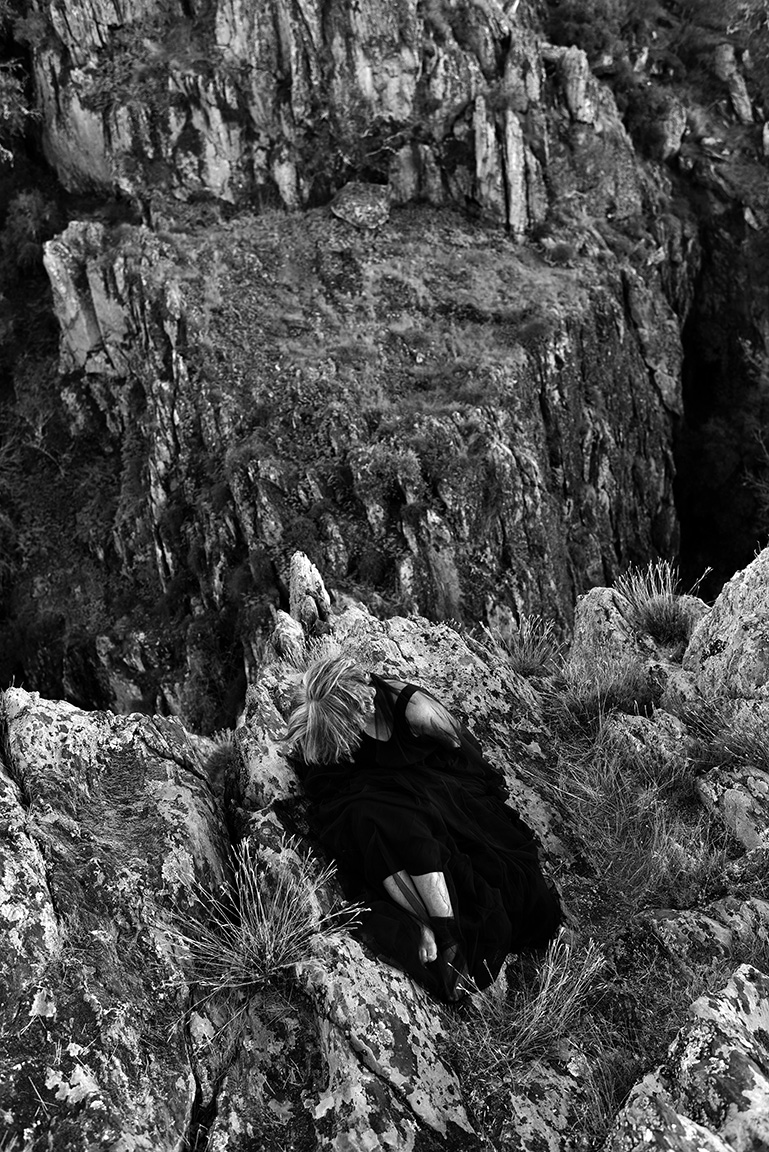 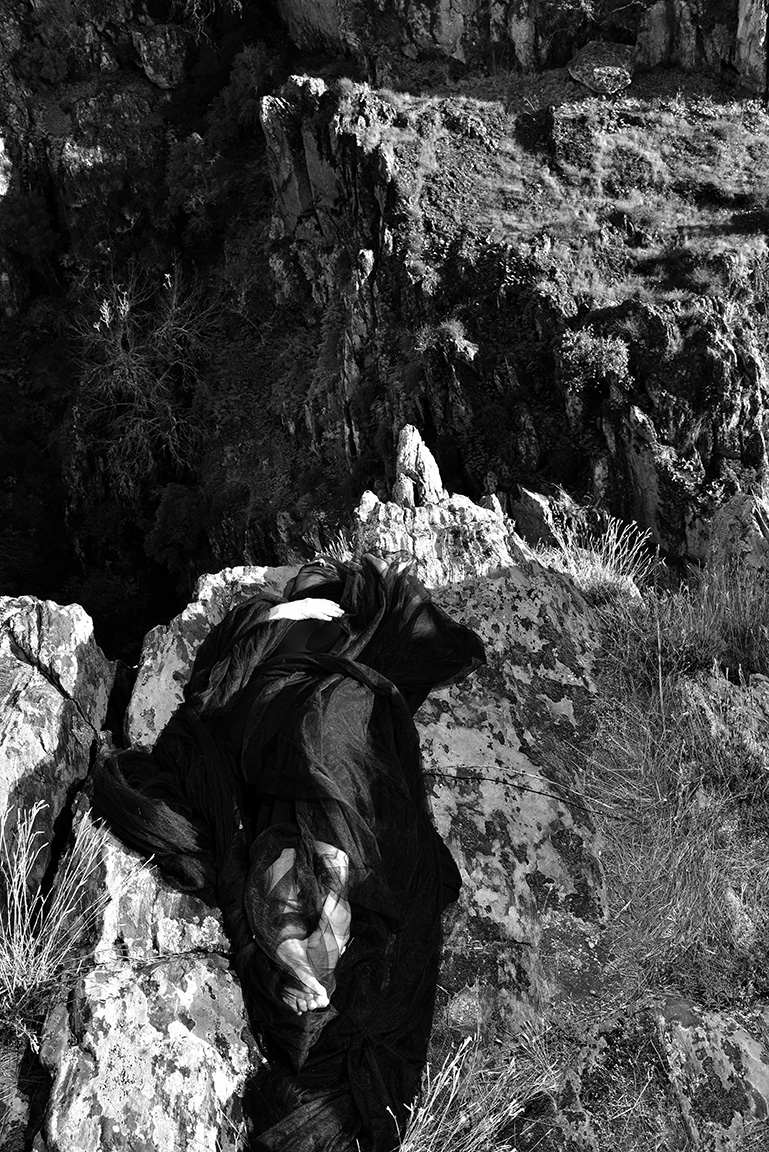 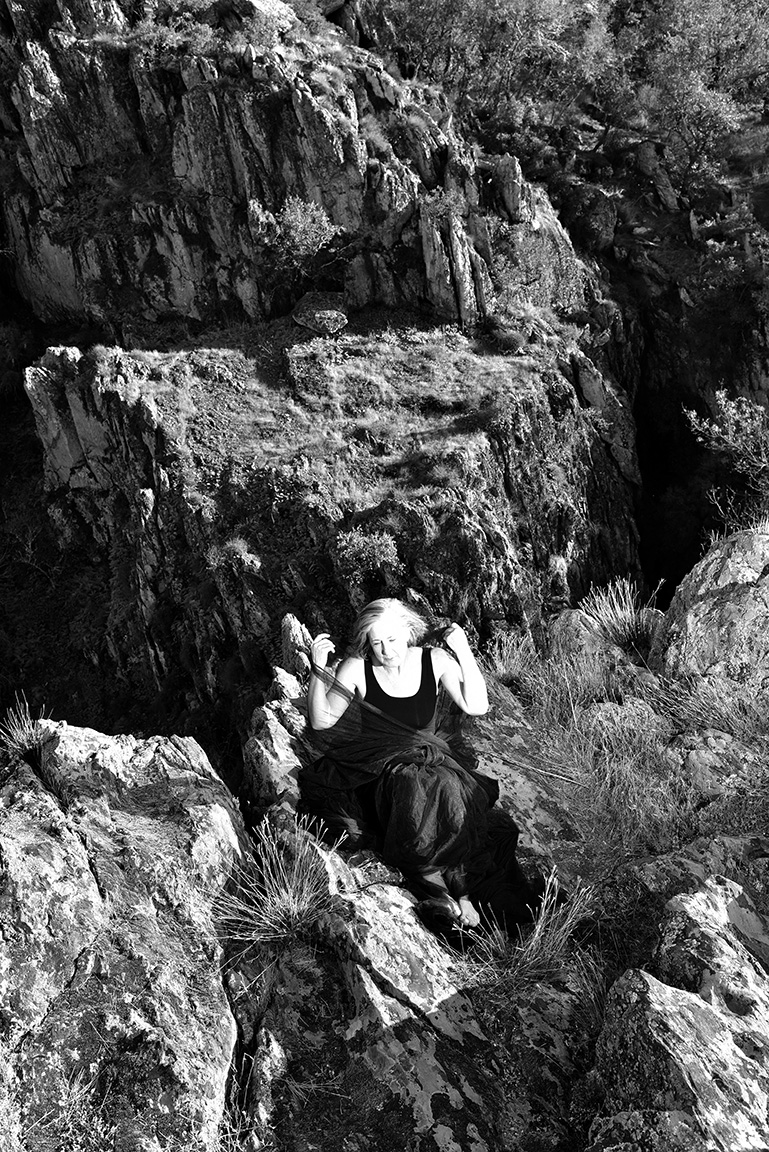 The fourth room holds the series Alento / Breath – a series of 10 smaller color images that were all shot near and in an old abandoned grain mill near Herdade de Marmelaire in October of 2016. We installed these images in the Palácio with a large swath of the brilliant red fabric we used in several of the images. The title Alento in Portuguese has layered meanings – not just breath but also nurturance, encouragement and inspiration. When I returned to Portugal in October of 2016 the rains had just come and there was a brilliant green in the trees and foliage. The old mill has been recently lovingly recovered by two Australian artists, decades of earth and weeds had been removed. I felt this nurturance of the landscape, of the mill and of myself as an artist. I took several images of the mill and the trees and painted and drew on these color images. Luis Branco took the images of me with the red fabric curtain in the mill. 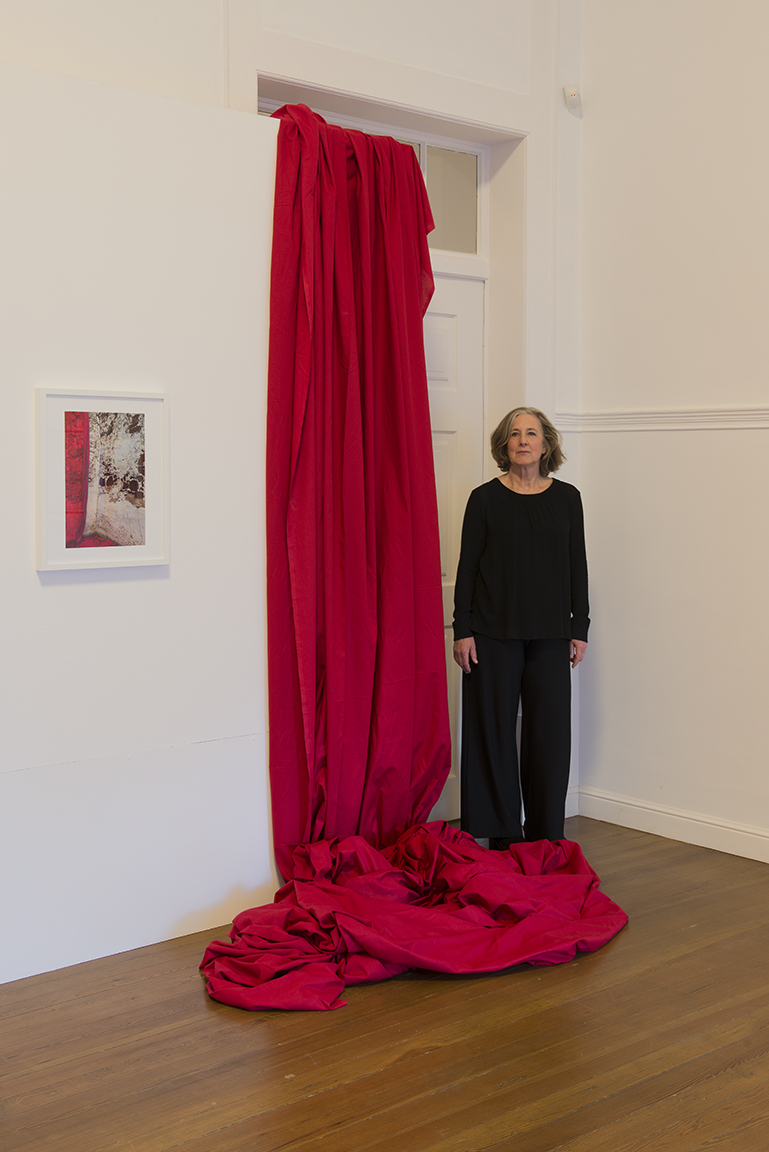 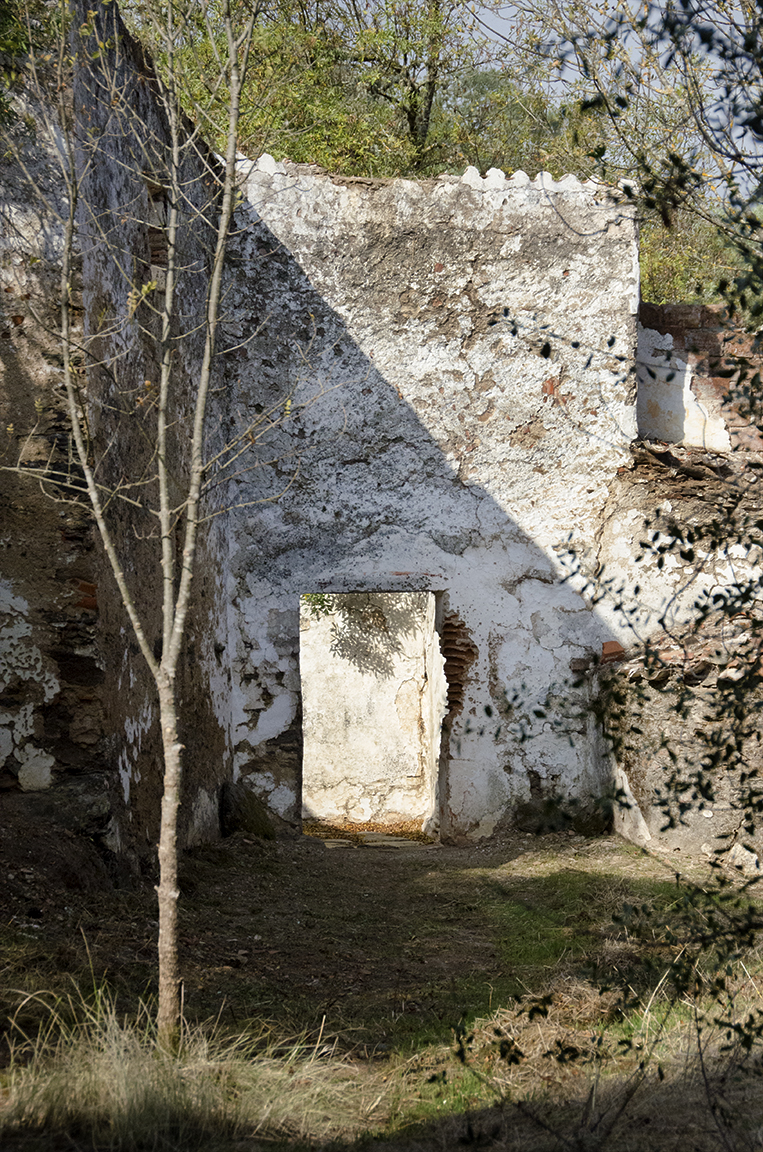 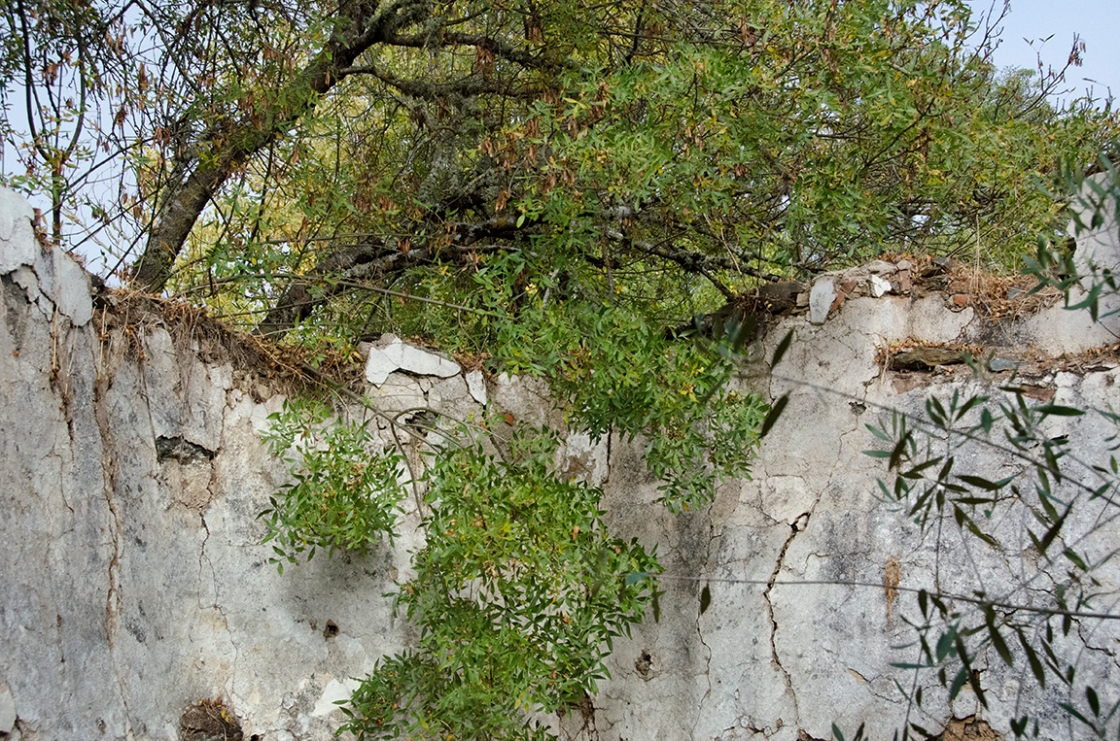 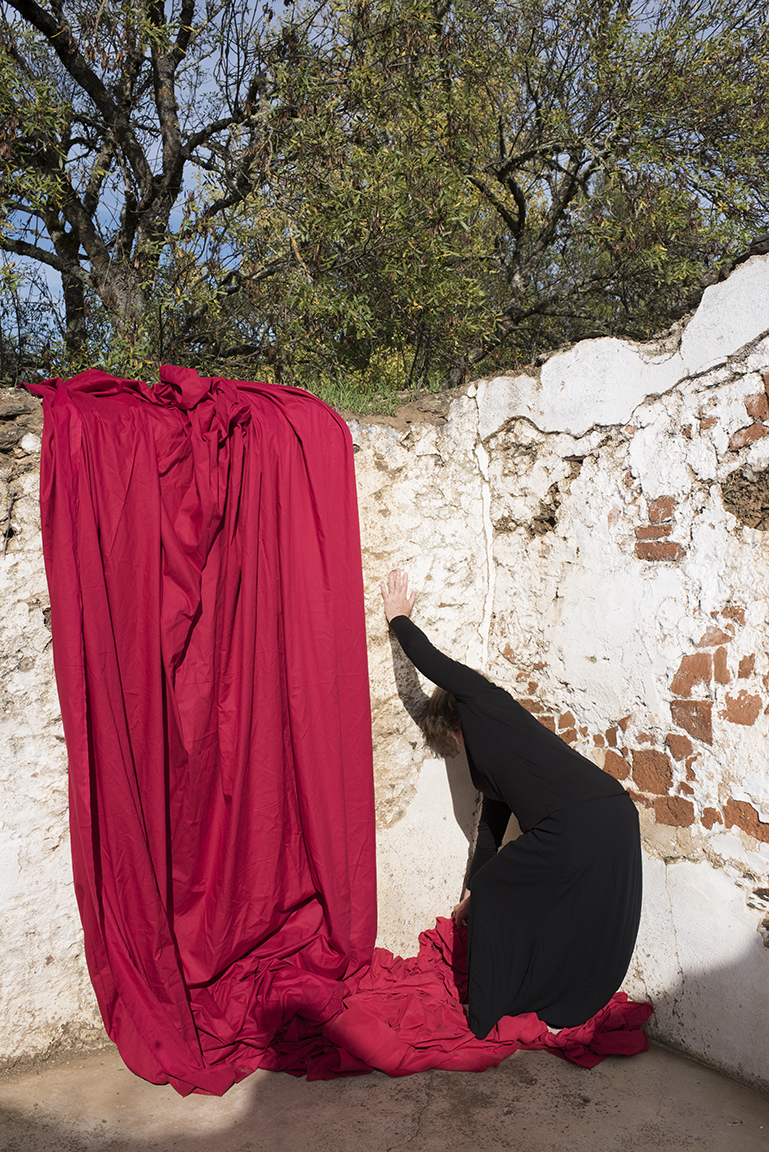 The fifth room in the palacio houses several series we made in the studio and on the terrace at the Obras Artist Residency at Herdade de Marmelaire in the fall of 2015. The series on the floor are titled Cadeira / Chair and the series of images on the wall are titled Realizar o Desenho / Performing the Drawing. These are perhaps the most conceptual of all the works in the show and are from my first collaboration with Luis Branco and Rui Fernandes at the Obras Artist Residency. These series show the influence of the remarkable Portuguese conceptual artist Helena Almeida who inspired me to come to Portugal in 2015. The series Performing the Drawing were shot with a drone camera by Rui Fernandes on the terrace outside the studio at Obras. We laid the white canvas on the ground and then I lay on the canvas and performed various gestures with the large swath of black fabric. These images, though not particularly related to a specific place, show a new attitude in my work and an ability to use myself and the female form as the subject – and inhabit my work in a new way… 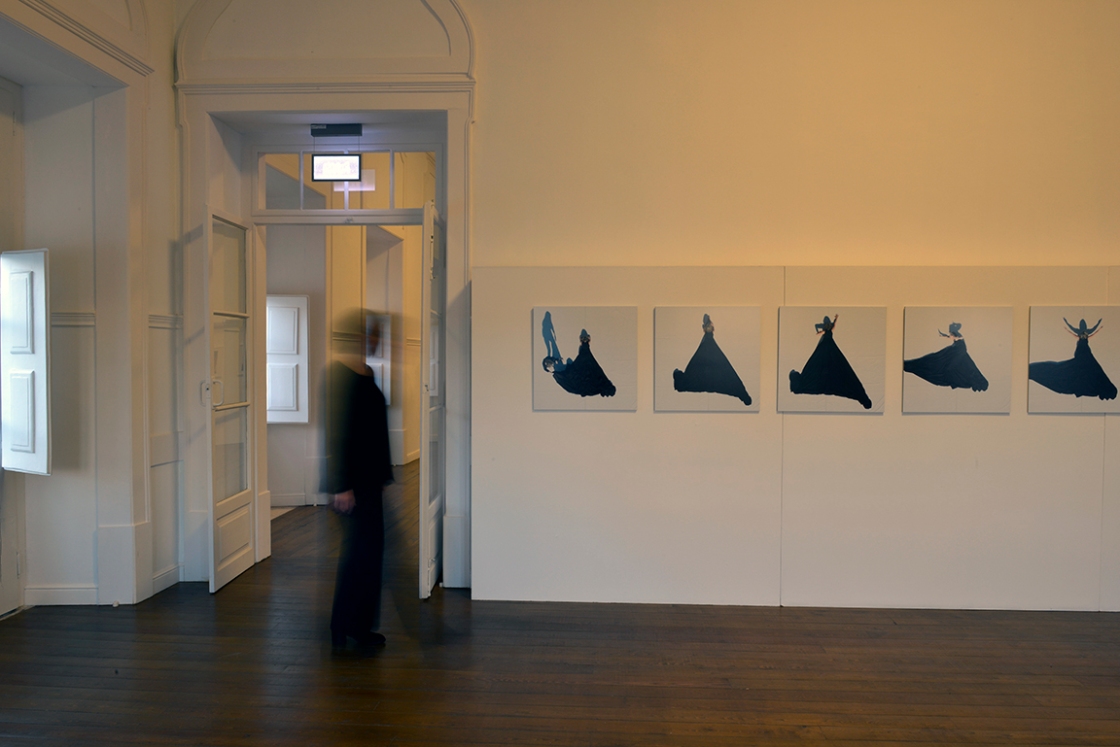 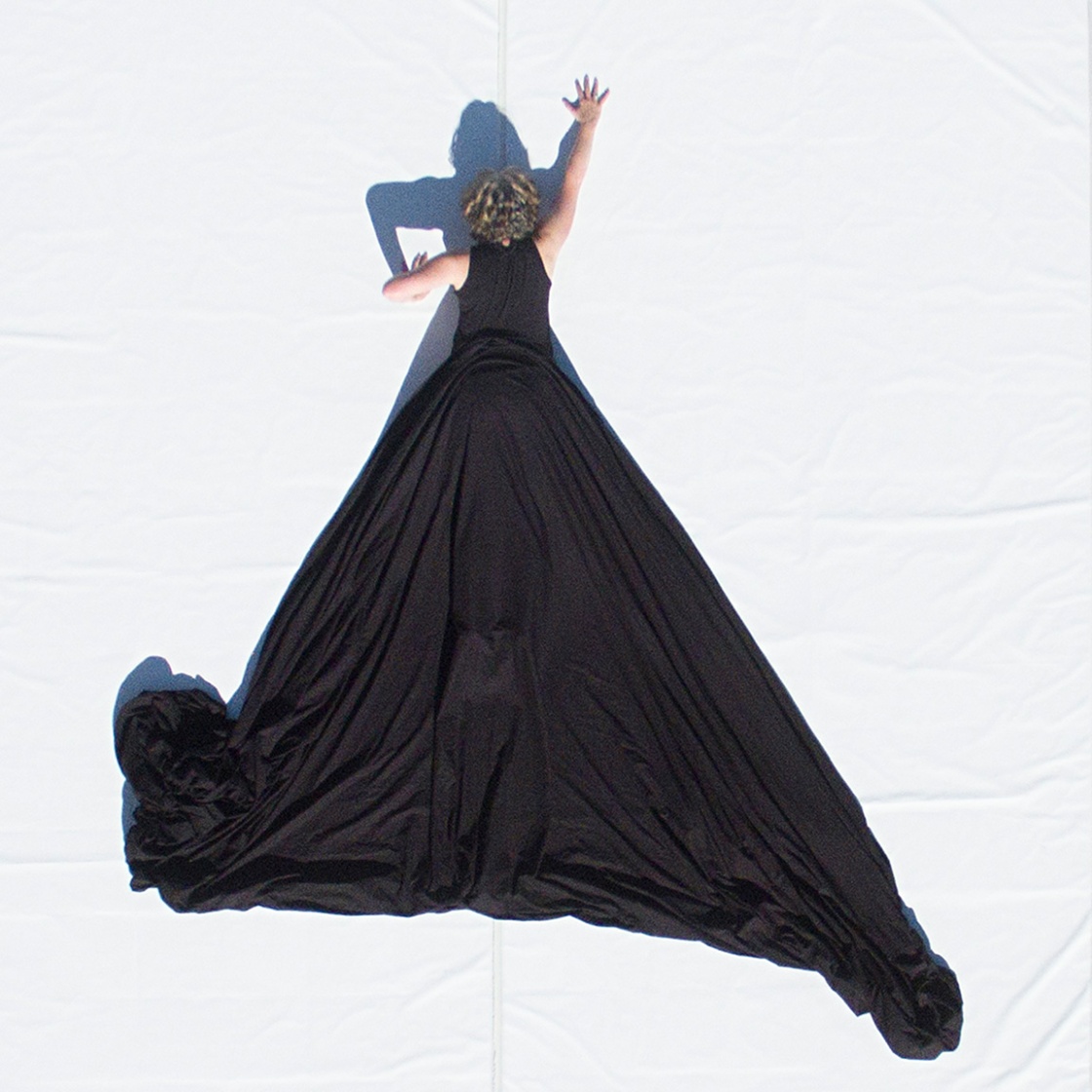 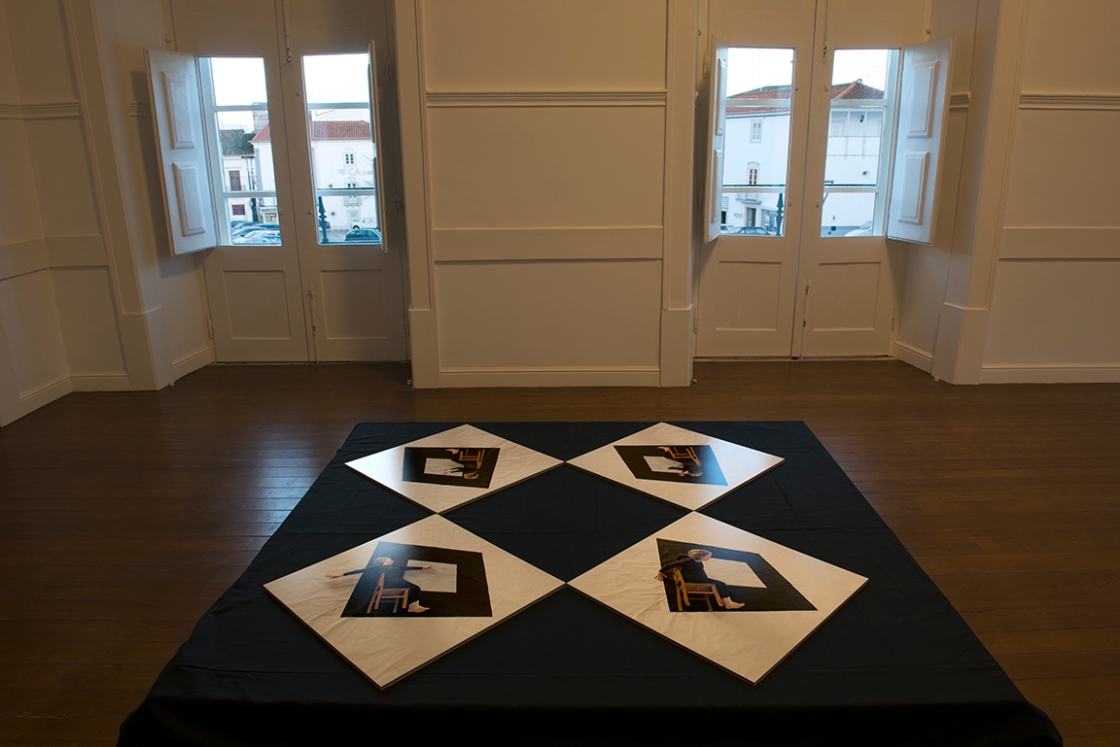 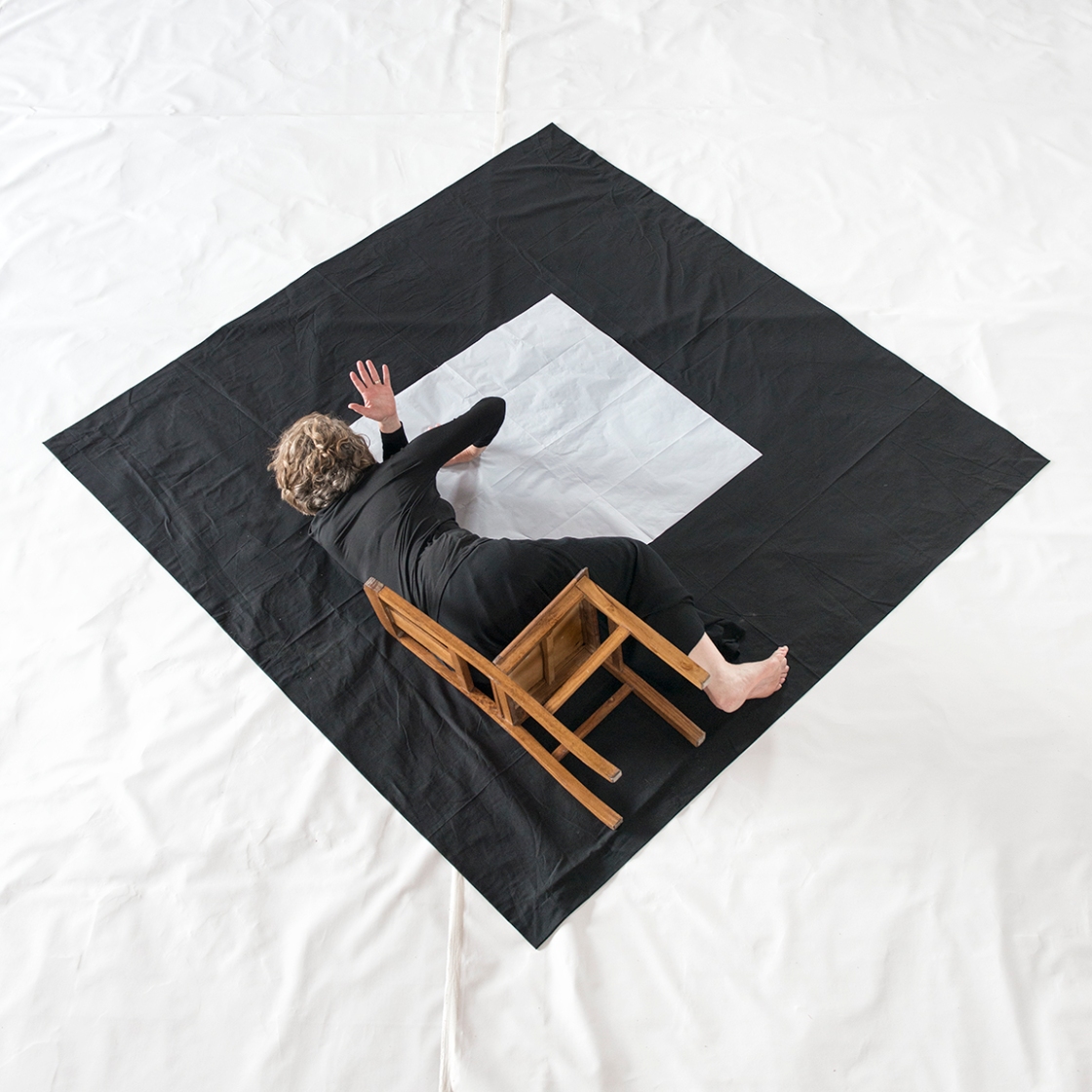 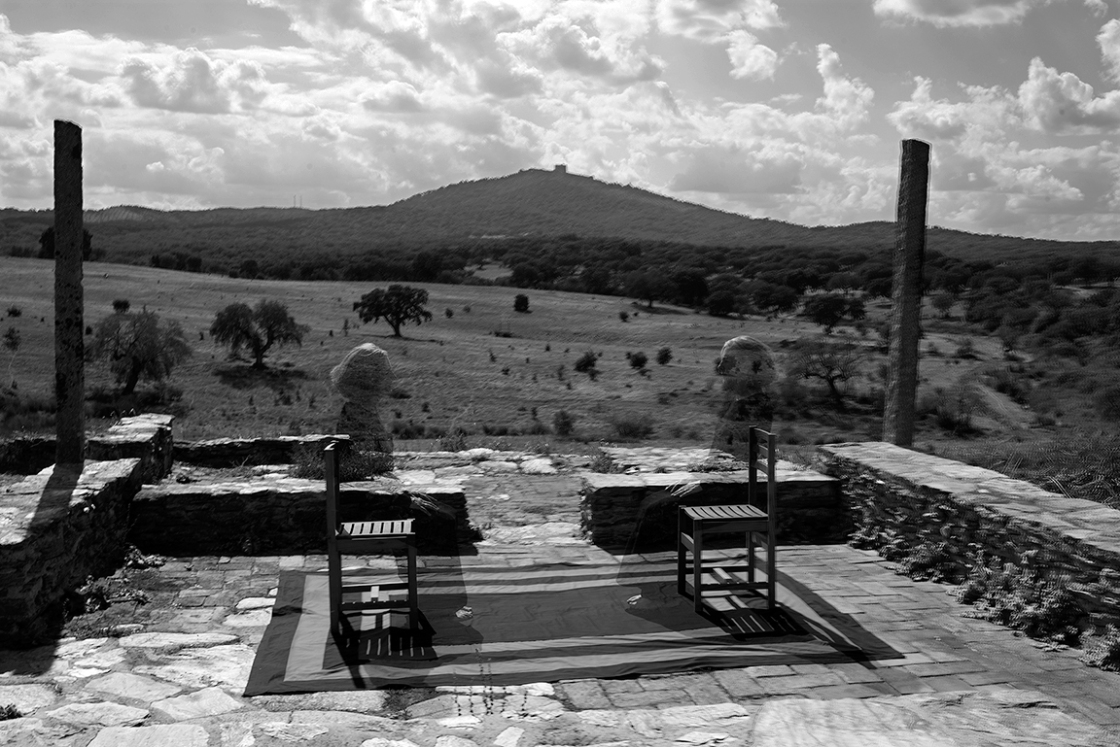 This collaboration and the exhibition of these works was made possible because of the generous support of the OBRAS Art Residency in Evoramonte Portugal. This residency in the rural environment of the Alentejo provides inspiration, space and hospitality for artists from around the world.http://www.obras-art.org/